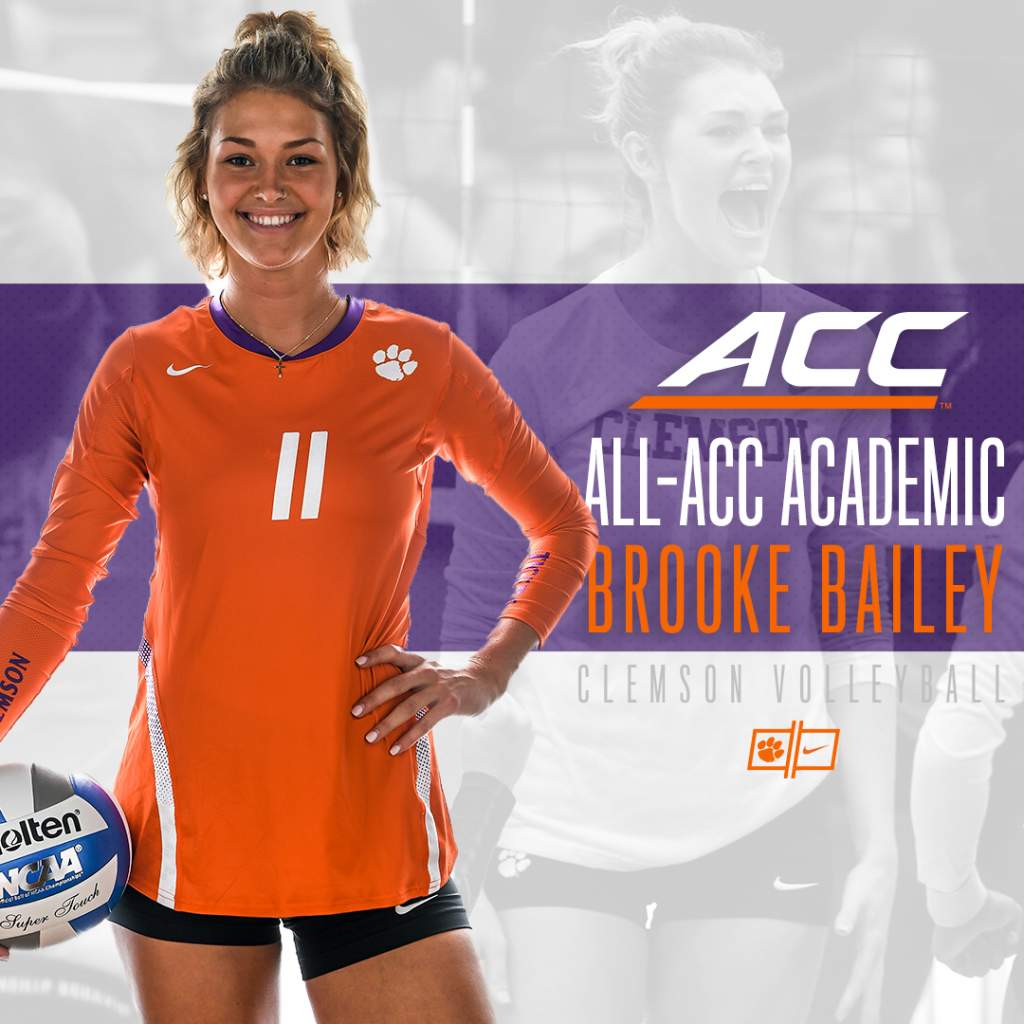 “We are so proud of Brooke and for her representation of Clemson Volleyball,” said head coach Michaela Franklin. “She is a reflection of championship behavior and setting a great example for her teammates and future Tigers.”

Bailey led Clemson in kills during the 2018 season after averaging 3.39 kills per set and played in all 129 sets. The Canton, Ohio native elevated her game against stiff competition, averaging 3.55 kills per set when facing American Volleyball Coaches Association (AVCA) top-50 teams. Bailey also ranked fifth in kills (3.71/set) against ACC foes. The Ohio State transfer posted double-digit kills in 28 of the Tigers’ 34 matches and finished the last 18 matchups with at least 11 kills. Bailey also tied the team’s single-match high this season with 20 kills in Clemson’s four-set win over NC State on Oct. 26. Additionally, Bailey guided the Tigers to their first victory over Miami – a road sweep on Oct. 19 – since 2011, which was also Clemson’s first win at Miami since 2009. Bailey earned all-tournament honors at the Clemson-hosted Big Orange Bash, which the Tigers won, and Tulane’s Sugar Bowl Classic.

Minimum academic requirements for selection to the All-ACC Academic Team are a 3.0 grade point average for the previous semester and a 3.0 cumulative average during one’s academic career. Athletic achievements during the most recent season are also considered in selecting the team.

Brooke Bailey:
✅ Double-digit kills in 25-of-31 matches
✅ Ranks fifth in ACC in kills
✅ Played all 119 sets this season

Brooke Bailey's 18 kills at Miami Friday tied her career high, which she originally set in 5 sets at WF last week. Yesterday, Bailey achieved that feat in just three sets. Her 18 kills are also the most by a Tiger in a 3-set match this season.#ClemsonVB🏐 #ChampionshipBehavior pic.twitter.com/5dt99A6WbF