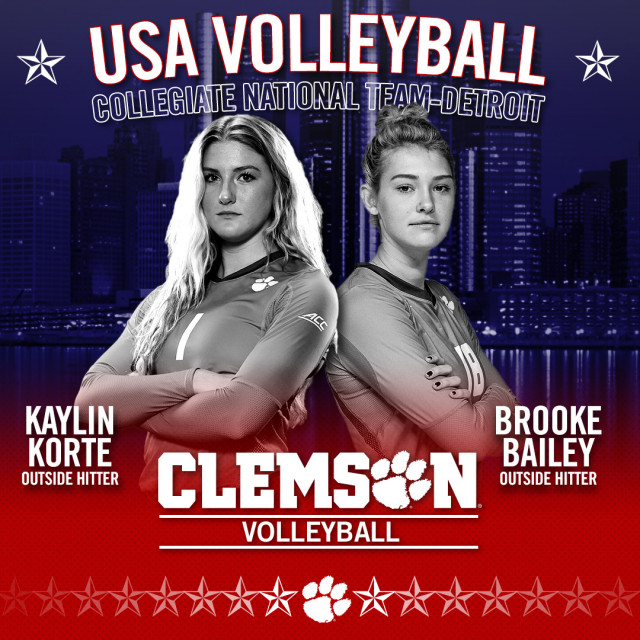 CLEMSON, S.C. – Clemson outside hitters Brooke Bailey and Kaylin Korte have been named to Team USA’s Collegiate National Team-Detroit, the organization announced Tuesday. The duo will represent the Tigers on the national stage as they train and compete in Detroit from June 22 through July 1.

“We are proud to have Kaylin and Brooke represent Clemson on the USA collegiate national team in Detroit,” said Franklin. “It’s an amazing opportunity to play at an elite level, learn from great coaches, and play with people they normally would face across the net.”

Korte, a sophomore, enters her second season with the Tigers this coming fall. In 2017, she was named a Second Team All-ACC selection after leading Clemson in kills per set (3.36) and points per set (3.85), both of which put her ninth among ACC leaders. The Morris, Illinois, native also ranked second on the team in digs per set (2.23) and a team-best 21 service aces in 2017.

“I’m humbled about this opportunity and think its’ s a great opportunity to show what Clemson volleyball is all about,” said Korte. “I’m also really excited to be doing this with Brooke.”

Bailey is a 6-2 transfer from Ohio State, who will make her Clemson debut in the fall. The junior started in all four spring exhibition matches against Kennesaw State, Georgia State, Auburn and Georgia Tech.

“I’m excited about the opportunity we have and the experience we’ll gain,” said Bailey.” “It makes it that much better that Kaylin and I can do it together.”

The CNT-Detroit squad, which is part of USA Volleyball’s High Performance pipeline and is considered a second tryout for the U.S. Women’s National Team, will train from June 22-26 at the University of Michigan. Afterward, the athletes will be assigned to one of two 12-member teams that will play three exhibition matches against each other at the Cobo Center from June 27, June 28 and June 30. The matches are being held in conjunction with the USA Volleyball Girls’ Junior National Championships under the same roof.