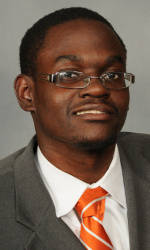 Thursday, 5:30 PM (CT) – “The Hustle” Imagine a guy sitting down with a black hoodie on while everyone else is either shooting around or being interviewed for the contest, you would think there’s no way this guy will do anything. Heck, people even wondered which contest I was in…shows how much they knew and you know what, THAT WAS MY PLAN!!!

You know that look that says, “I know something you don’t know,” inside my mind I was saying that because I wanted to be such an afterthought in the contest that when I did dunk there would be people STUNNED!

Thursday, 8:15 PM (CT) – “Fandom” Watching the three-point contest, I will not comment on Northwestern’s John Shurna’s shot style except to say that he’s DEFINITELY consistent. Unorthodox, but HIGHLY effective and clutch when it mattered the most.

Thursday, 9:19 PM (CT) – “The Execution” Ok, so my original plan did not involve me getting furiously hung on my only warm-up dunk attempt. Add to the fact that I was the first dunker, my amount of nerves hit an ALL-TIME high. I had zero crowd support (my plan was to at least have a little) and to be honest I don’t know if I had the full attention of the judges. So get a little attention back, I break protocol during my wait time and I go and touch between the square and the top of the backboard (just to show off my 44″ vert for the people so they see what I’m working with).

Coming out of the gate, I had to wow them to reach the second round and between the legs off the bounce was my only chance. Not only did I get it on the first try, but I had Jimmy Dykes saying things like “I’m shocked…he was the quietest guy!” Welp, how’d you like that wake-up call…I tried finding a pillow and then lying on it while looking into the camera and saying “Stop sleeping on me!” But I decided to give a shout to SC and most notably my boy, Hykeng. by doing the Roy mixed with his signature shark fin.

Sadly, I only got a 37 (price of going first) but I was able to get to the second round.

Thursday, 9:39 PM – “The Tribute” So, you saw that I had the Larry Nance jersey; well, I wanted to pay homage to the Clemson alum as well as the original slam dunk champ and perform one of his old rock-the-cradle dunks in his jersey. Unfortunately, I missed my first attempt so that caused my score to suffer, but I still I accomplished my goal.

Thursday, 9:50 PM – “Desperation” Everyone has to have ONE guaranteed perfect score dunk in their repertoire and I was afraid to use mine in the second round but going into the last dunk of that round, I was in last place so I decided to go with it. It was a simple dunk with a CRUCIAL variation that I hadn’t seen done before and I was crazy enough to try it: the SHOT CLOCK! Brittany and I had practiced the pass the day before but I hadn’t tried the full dunk, so this was still a concept dunk. Her pass was perfect and I was able to pull off the windmill and throw it down to a flood of cheers. Even the judges dapped me up to show respect for the dunk and creativity.

Thursday, 10:10 PM – “The Clock Strikes 12” I actually had a few more “big” dunks planned and was planning to unveil one in the finals, but I did not advance. (James) Justice shut it down when it was all said and done but I wonder how it would have stacked up with my “planned” last dunk. I was going to have someone pass it from the stands and I was going to catch it off the bounce and either windmill it, go between the legs, or 360 it. Overall, I had a GREAT time enjoying all the festivities and meeting these other great seniors in the nation. Many of us will keep in touch based simply on the bond we formed over those two days.

I’m glad I could represent not only Tiger Nation at the Final Four “weekend”, but also my hometown as well as my Lord and Savior. I do not know what the future holds for me after all of this is said and done, but I do know who holds it and I’m trusting He’ll open the right doors at the right time because who knows, I may just be embarking on what appears to be another UNEXPECTED FLIGHT!!!