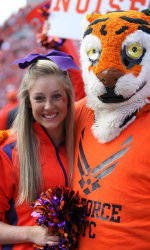 NASHVILLE, TN – Athlon Sports has selected Shelley Smith from Clemson University to compete in Round 5 of the 2011 Sideline Spirit Contest. Smith will be competing against contestants from Baylor University, Oklahoma State University and University of Minnesota. Voting for Round 5 will begin on Monday, October 31 and will run through 11:59 PM CST on Saturday, November 5.

This year, fans will cast their votes through their mobile phones via SMS messaging by texting the word “SPIRIT” to the number 67463. Each fan will be limited to one vote per round, and the contestant with the most votes at the end of each round will advance to the Final Round.

The Athlon Sports Sideline Spirit Contest is entering its tenth year and has proven to be one of the most popular programs on our website. Twenty universities from across the country will be chosen to participate in the contest, which runs from the beginning of October to just before Thanksgiving.

As part of the contest’s new ‘fan friendly’ format, the competition is broken up into five rounds, with four contestants representing their school in each round. Visitors to the Athlon Sports website will have the capability to view a brief biography and pictures of each representative and will be able to easily cast their vote from their mobile phone. The contestant with the most votes at the end of each round will advance to the finals where they will go head to head with four other finalists to determine who will become the 2011 Athlon Sports Sideline Spirit Champion!

The Grand Prize for this year’s winner includes a professional photo and video shoot in preparation for her feature in the 2012 Athlon Sports College Football Pre-Season Magazine. The contestant representing the winning school will also win a $1,000 personal scholarship in addition to $2,000 cash for her school’s spirit program.