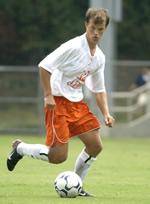 The Clemson University Athletic Department announced Tuesday afternoon that $ 2,609.50 were raised at the most recent One Clemson…Solid Orange athletic event as Trevor Adair’s men’s soccer team posted a 1-0 victory over the University of South Carolina Sunday afternoon at Historic Riggs Field. Clemson is currently 3-0 in One Clemson…Solid Orange events for the 2003 season. The money will be directed to an Academic Enhancement Fund for Acheivement of Clemson University’s Goal to Become a Top 20 University

The Clemson Men’s soccer match was the inaugural One Clemson…Solid Orange event with special ticket pricing. For the selected men’s and women’s basketball, men’s soccer and baseball games during the 2003-2004 academic year, an additional Solid Orange…One Clemson contribution has been added to each athletic ticket sold, with the proceeds directed to an Academic Enhancement Fund for Acheivement of Clemson University’s Goal to Become a Top 20 University, as directed by President Barker. Those ticket prices, as well as game-day designations for the remainder of the academic year are noted below. Clemson students will continue to receive complimentary admission to the One Clemson… Solid Orange events.