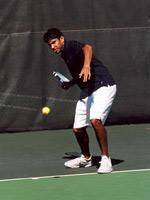 Clemson’s Ash Misquith was named this week’s Atlantic Coast Conference Men’s Tennis Player of the Week after leading the No. 31 Tigers to three conference wins over No. 25 Georgia Tech, No. 34 Virginia and Maryland.

Misquith finished 7-0 in the league at No. 6 singles. In doubles action, Misquith paired with Nathan Thompson to defeat the Terrapins’ Troy Demers/Chris Chiu at No. 1 doubles, 8-4. Clemson is the number two seed in this year’s ACC Championship and will take on the winner of No. 7 North Carolina versus No. 8 NC State on Friday, April 18 at the Millbrook Exchange Park in Raleigh, N.C.