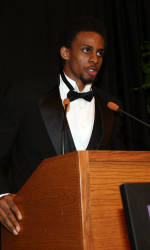 Clemson, SC–Clemson University School of Architecture’s fourth-year students and faculty felt there was one among them too special to graduate without a little extra fanfare. Standout basketball student-athlete Cliff Hammonds is so unusual, in fact, that they had to create an award to fit him.

Some of his classmates and professors surprised Hammonds on Friday, April 18, with a Citation for Excellence signed by Clemson President Jim Barker; College of Architecture, Arts and Humanities Dean Chip Egan; and School of Architecture chairman Ted Cavanagh.

The citation recognized Hammonds “for quiet leadership, discipline and collegiality, during the four years of undergraduate architectural education while at Clemson University.”

Hammonds distinguished himself on the basketball court as a starting guard and on-court leader. Academically, Hammonds stood out among his classmates in both of his majors: architecture and psychology. Teammates and classmates both respected Hammonds’ work ethic.

“He’s such a special student. He represents the university so well and he’s a good student, too, with the respect of his peers. There was really no category of award that fit his criteria,” said architecture professor Lynn Craig. “So we created this special recognition for him. We’ve never done anything like this before, but we’ve never seen anyone quite like Cliff before.”

In a brief surprise ceremony in architecture Professor Yuji Kishimoto’s studio, Hammonds was presented the citation and a book signed by his fourth-year classmates and faculty.