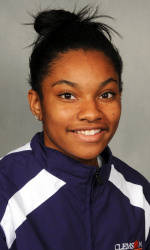 CLEMSON, SC – Clemson junior April Sinkler has been named the ACC’s Most Valuable Women’s Field Event Athlete for the second straight season, the conference office announced Friday. Sinkler’s honor was the result of a vote of the league’s 12 head coaches. Virginia Tech’s Queen Harrison was named the women’s Most Valuable Track Athlete. Voting for ACC Coach-of-the-Year and ACC Freshman-of-the-Year will occur at a later date.

Sinkler is coming off an exceptional weekend in which she scored the most points in individual events out of any student-athlete in the ACC. Sinkler produced 25 of Clemson’s 145.5 team points, which led the Tigers to their first ACC Indoor Championship since the 1992 season.

The native of Stafford, VA won the high jump and long jump for a second straight season. She began the meet strong by successfully defending her long jump crown. She hit an automatic NCAA qualifying mark of 21’6″, which is also a school record, on her third preliminary attempt. The mark stood through the finals, making her the first Clemson female to win at least two indoor ACC long jump championships.

Sinkler won the high jump in dramatic fashion. She became the first Clemson female ever to eclipse the six-foot mark. In doing so, however, she had to clear three separate heights on her third and final attempt. The last was 6’0.75″, an automatic NCAA qualifying jump. Sinkler is the only female in Clemson history to win the high jump.