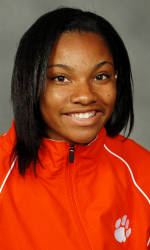 Sinkler’s day began with the long jump at 2:45 PM. She had a top mark of 20’0.5″, which is a personal best for the Stafford, VA native. After taking in all six attempts, she was prepared for the high jump initially scheduled for 6:20 PM. However, a rain delay of nearly two hours pushed the start of the high jump back until 8:00 PM. The extra recovery time helped Sinkler, who was able to clear 5’7.25″ on her second attempt. She tried for 5’8.5″, but came up short on three tries.

Sinkler ranks in a tie for second in Clemson’s record books in the outdoor high jump, where she holds a top clearance of 5’8.75″ from earlier this season.