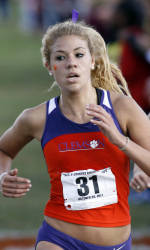 CHARLOTTE, NC – Natalie Anthony won the women’s 1500 meters on Friday and Chris Slate won the 800 on Saturday to highlight action for Clemson at the Charlotte 49er Classic at Irwin Belk Track. It was the first outdoor meet of the 2012 season for the Tiger teams.

Anthony captured the women’s 1500-meter title Friday. The sophomore out of Randolph, NJ had a personal best time of 4:29.17, holding off Furman’s Erin Barker at the line. Kim Ruck was third place with a time of 4:30.36, also a personal best. Both times are among the top 10 in Clemson history for the event. Aaron Ramirez was third in the men’s 1500, posting a time of 3:52.41.

Slate won the men’s 800 meters on Saturday, Clemson’s lone win of the final day. The Tiger senior out of Delaware opened his final outdoor campaign with a time of 1:51.69. Ramirez was eighth in the event, clocking a time of 1:52.62.

Ty McCormack was the top collegian in Friday’s 5000-meter run. The sophomore out of Gainesville, GA crossed the finish line with a time of 14:28.67.

Brianna Blanton of the women’s team and Justin Murdock of the men’s program were the top performers Friday in the 400 prelims. Both finished in 17th place, but did not advance to Saturday finals. Murdock, a short sprinter by trade, had a time of 48.72 and was runner-up in the final heat. Blanton, a freshman whose best event is the 800 meters, had a time of 59.05. She then ran the 800 on Saturday and was fifth with a time of 2:12.16, No. 10 on Clemson’s all-time list.

Murdock also ran with the 4×400-meter relay on Saturday, teaming with Warren Fraser, Ryan Mangone and Aaron Ramirez in a fourth-place effort. The Tiger relay put together a time of 3:15.80.

Lauren Terstappen was third place in the women’s pole vault. The sophomore jumped 12’5.5″ for her best effort of the afternoon, finishing one spot ahead of freshman teammate Caroline Bond (11’11.75″). Also in the field events Friday, junior Brittney Waller was third in the hammer throw. She had a season-opening toss of 161’8″.

Torian Ware was runner-up in the men’s high jump on Saturday. The freshman out of Crawfordville, GA cleared a height of 6’8.75″ on his final try before falling in three attempts at the next height. Another freshman and like Ware, an indoor All-ACC performer, Shai Carpenter, was runner-up in the triple jump. The Mauldin, SC native had a top leap of 49’5″ on his fifth jump of the day.

Marcus Brown led three Tiger throwers in the men’s shot put Saturday. He had a toss of 51’0.75″ and finished in fifth place. He also had the best finish in the men’s discus with an 11th-place effort (150’6″).

The teams return to action next week in Orlando, FL for the UCF Invitational on March 23-24.