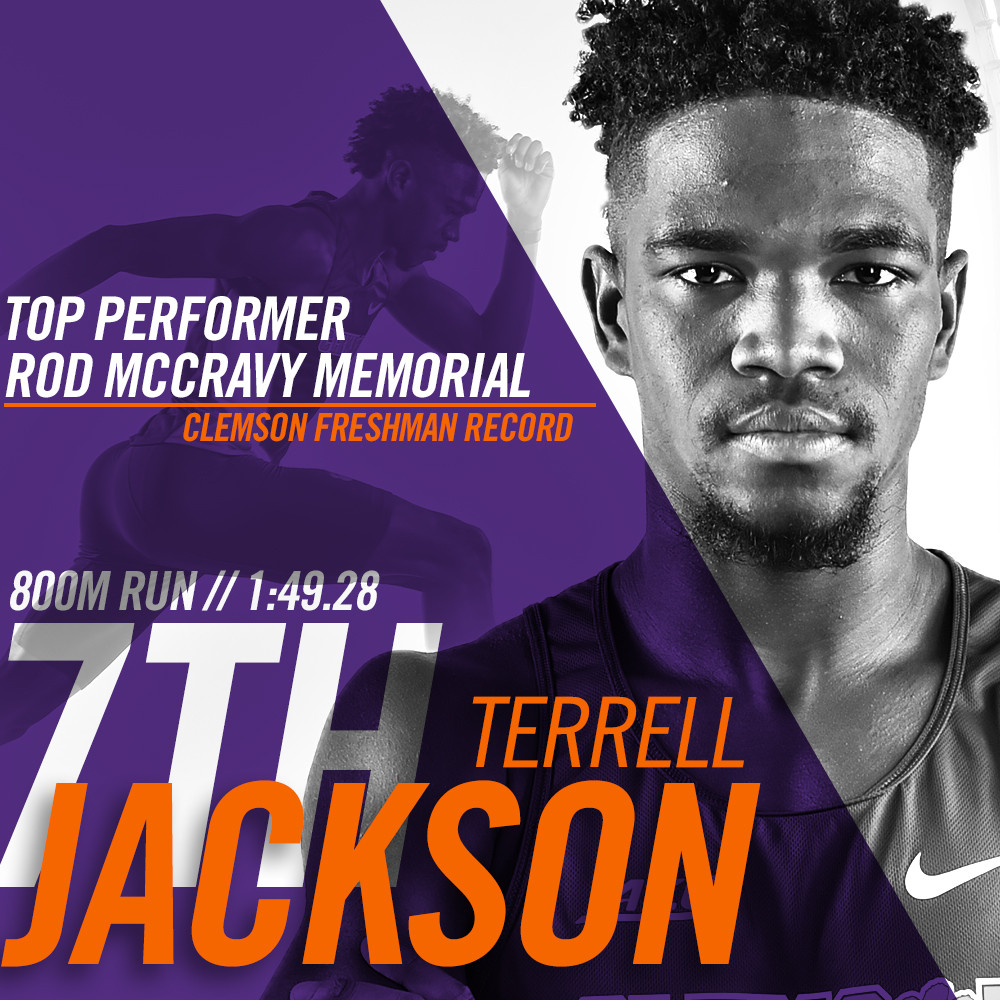 Another Record Falls In McCravy Finale

LEXINGTON, Ky. – With an impressive effort from a freshman in the 800 meter run on the final day of the Rod McCravy Memorial, Clemson has now broken a record in each of its first four meets of the indoor season. First, Grace Barnett set the Clemson record in the mile, Chris McBride followed with a program record leap in the long jump, last week Ersula Farrow set a facility record in the 800 meter run and today, Terrell Jackson set the Clemson record for the fastest 800m time by a freshman in program history.

Mpho Makofane led the way for the Tigers in the 800 meter run, finishing fourth overall at 1:48.53 to register the second fastest time in Clemson history and the seventh fastest time in the nation. Not far behind him was Jackson at 1:49.28, placing him seventh in the event and 10th in the country. Jackson’s time bests the previous freshman record by a tenth of a second. In fact, the previous freshman record was run at the same meet a year ago by John Lewis.

Michael Cheeks was just .46 seconds off the top time in the 400 meter run at 47.48 to place second in the event and earn the 12th fastest time in the country. Kirk Lewis ran a personal best, 7.88 in the 60 meter hurdles to take fourth place and the men’s 4×400 meter relay team finished the day with the fifth fastest time in the country. Jeffrey Green, Cordell Lamb, Cheeks and Jackson combined for a time of 3:09.01 to take fourth overall.

The women’s 4×400 meter relay team ran well as well, clocking in at 3:39.08 to take sixth with the 11th fastest time in the country. Olivia James, Markeeta Thomas, Malayshia George and Lakeisha Warner were the participants in the event. Rebekah Smith continued to impress in her freshman season with a sixth place effort in the 60 meter dash and a time of 7.41.

The women kicked off the day placing three Tigers in the top eight of the triple jump with last week’s ACC Women’s Co-Field Performer of the Week leading the way once again for Clemson. Iana Amsterdam registered a jump measuring 41-4.5 to take third with Anasterasia Terrell right behind her in fourth with a leap of 41-3.25. Breaisha Morton took sixth place with a leap distancing 39-4.

Next, the Tigers will come back to Clemson to host the Bob Pollock Invitational. Action begins on Friday, January 27 and concludes Saturday, January 28.