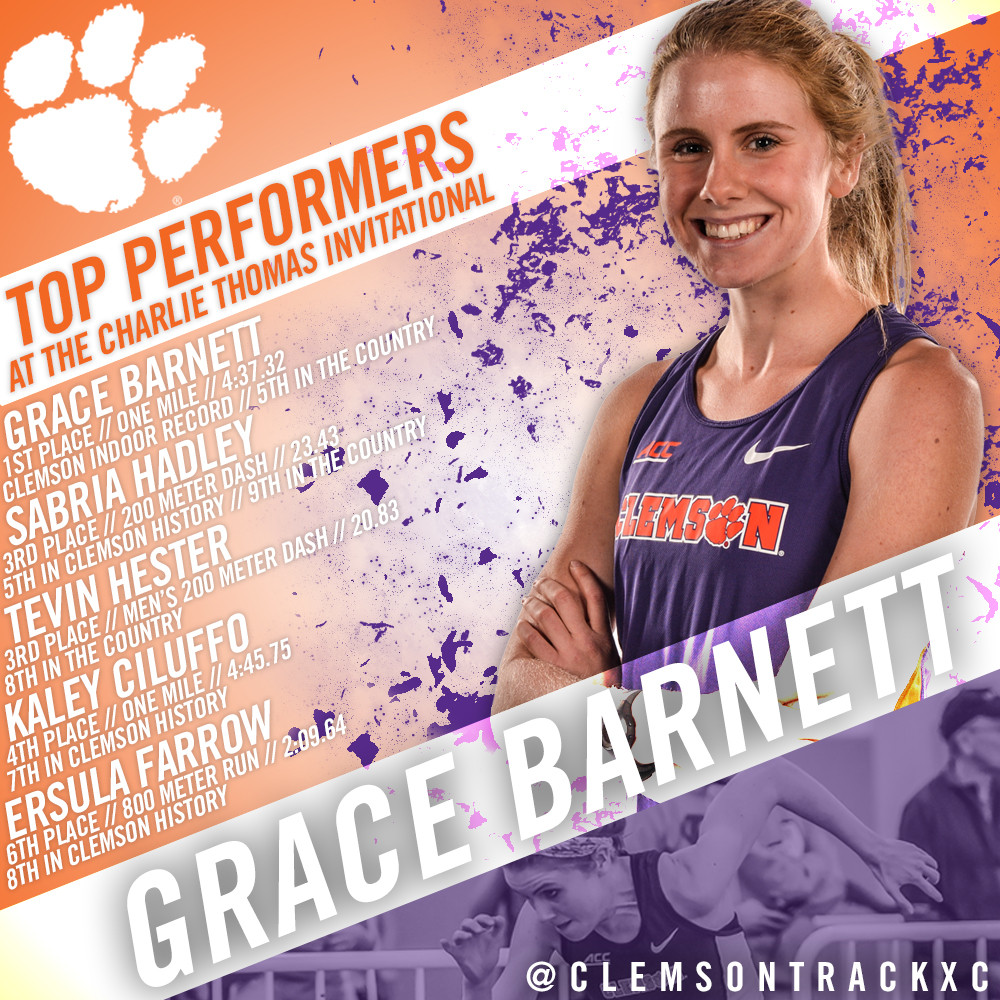 Another Clemson Record Falls In Texas

COLLEGE STATION, TEXAS – One week after Shai Carpenter shattered the Clemson indoor triple jump record, Grace Barnett blew by a record that has stood for three decades to highlight Clemson’s effort at the Charlie Thomas Invitational.

Clemson’s queen of the indoor mile crossed the finish line a full second faster than the previous record of 4:38.30, and was just .03-seconds short of the meet record. The redshirt sophomore clocked in at 4:37.32 to win the event and walk away with the fifth fastest time in the country. Barnett’s time is also a four-second personal best. Tina Krebs recorded the previous record in 1986 when she crossed the finish line at 4:38.30.

Behind Barnett, Kaley Ciluffo ran the seventh fastest mile in Clemson history in her first individual collegiate race. Ciluffo finished in fourth place at 4:45.75 after she assisted the women’s distance medley relay team to a first place finish the night prior. She ran alongside Markeeta Thomas, Imani McGowan and Katie Fortner for a combined time of 11:43.98.

The women were not done making history after the mile as Sabria Hadley ran the fifth fastest time in program history in the 200 meter dash. Her third place time of 23.43 also places her ninth in the country. Taylor Williams trailed her with a personal best time of 24.08. Hadley also placed fourth overall in the women’s 60 meter dash with a time of 7.44.

In the men’s 200 meter dash, Tevin Hester dropped the eighth fastest time in the country when he crossed the finish line at 20.83 for a third place finish. The performance came after her ran the 60 meter dash in 6.65 to place second.

Freshman, Ersula Farrow enjoyed similar success to Ciluffo as her sixth place time of 2:09.64 in the 800 meter run is good enough for eighth in Clemson history. She later contributed to the nations 23rd fastest 4×400 meter relay time in the country as Deja Parrish, Tanisha Coppin, Farrow and Malayshia George combined for a time of 3:38.44 to place third in the event. Coppin also ran the open 800 and placed fifth, just ahead of Farrow at 2:09.56. Imani McGowan ran a personal best 2:13.45 in the 800 meter run as well.

Parrish won the women’s 400 meter run at 54.13. The time is currently the 23rd fastest time in the country and it paced Myasia Jacobs (54.59) and Olivia James (54.67) to second and fourth place finishes respectively. Jacobs also placed second in the 60 meter dash with her time of 7.39.

Jeffrey Green shined in the men’s 400 meter run as he turned in the nation’s 22nd best time this season to place third at 47.08. Zachary Riley (49.11) and Deron Gordon (49.14) each ran personal bests in the event as well. Green came back to anchor Cordell Lamb, John Lewis and Michael Cheeks in the men’s 4×400 meter relay. Together they combined for a time of 3:08.06 to place second overall. The time stands as the ninth best time in the country. The relay wasn’t Cheeks’ first race of the day either as he completed the 400 meter run in 48.11 to finish seventh.

Lewis’ contribution in the relay came after his 1:49.93 in the 800 meter run, placing him fourth in the event. Chad Fennell (1:51.91) and Aaron Gambrell (1:55.55) each walked away from the event with personal bests in the event. However, the personal best for Fennell came after he assisted Cameron Thornton, Dareyus Person and James Quattlebaum to the nation’s 24th best distance medley relay time. The DMR team completed the event in 9:53.80 to earn first place.

Women’s harriers, Elizabeth Dawson and Catherine Herring also ran personal bests in the 3,000 meter run. Dawson clocked in at 10:05.59 and Herring shaved 10-seconds off of her previous best time, clocking in at 10:05.73.

In the field, Carpenter won the men’s triple jump with a leap of 49-10. In the women’s triple jump, Anasterasia Terrell (40-4) and Mimi Land (38-9.5) placed fourth and eighth respectively. Land also jumped 18-7.25 in the long jump earlier in the day to take third place overall. In the men’s long jump, Chris McBride placed fifth with a jump totaling 23-8 and Tevin Quick landed in the pit with a personal best jump of 21-2.75. Quanterious Caldwell capped off notable jump performances with his seventh place height of 6-4.75 in the high jump.

Jordan Pickerel highlighted the throws, placing fourth in the weight throw with a distance of 54-8.75.

Next week, another difficult test awaits the Tigers in Fayetteville as Arkansas will host Clemson in the Tyson Invitational. The meet takes place on Friday, February 12 and Saturday, February 13.