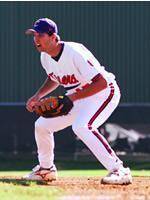 Junior first-baseman Andy D’Alessio was one of five players named as National Players-of-the-Week by Collegiate Baseball on April 3. He was named ACC Player-of-the-Week as well for his efforts in five games from March 28 to April 2. In two games against #19 Georgia and three at #11 Miami (FL), he was 11-for-21 (.524) with seven runs scored, four doubles, four home runs, 16 RBIs, and a 1.286 slugging percentage, helping the Tigers to a 4-1 record. He had at least three RBIs and one extra-base hit in each of the five games. He has seven homers and 26 RBIs in the last 10 games to raise his season totals to nine homers, 37 RBIs, and a .343 batting average.