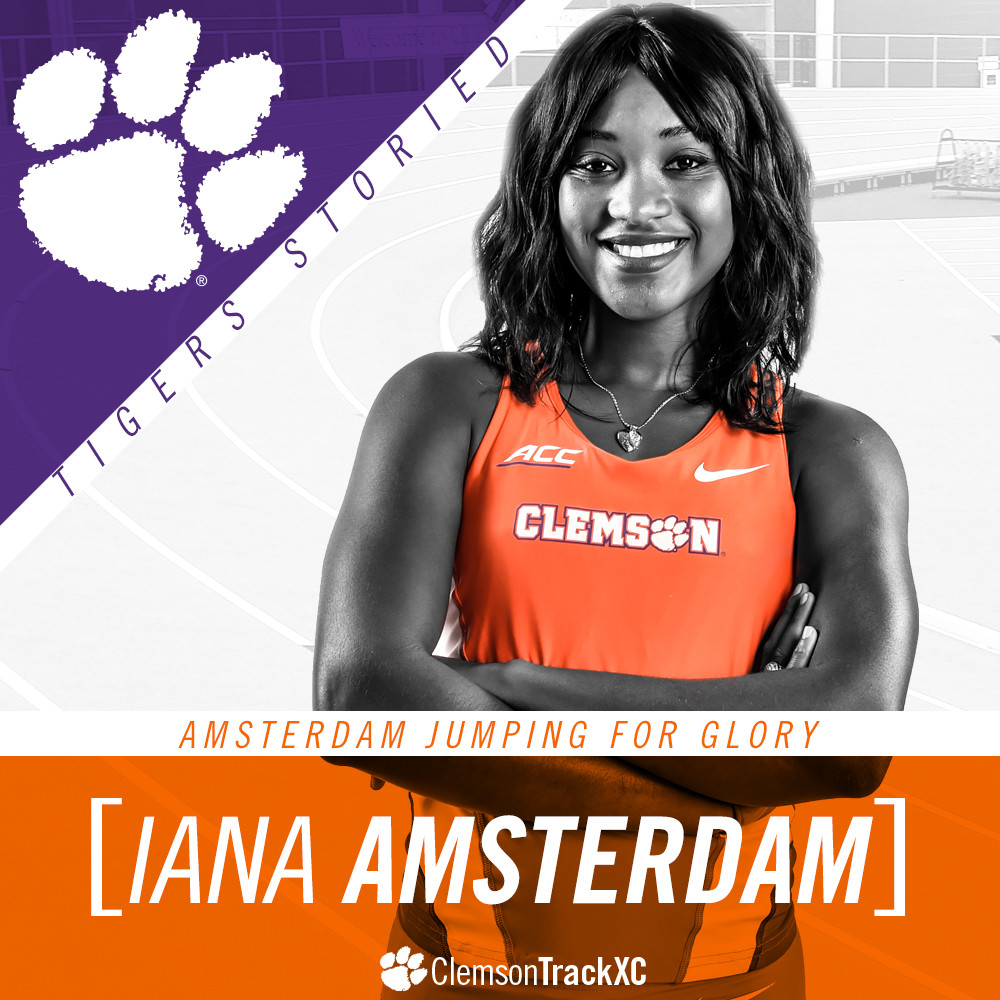 One of the primary inspirational tenets of life, that particular creed is the driving force behind Clemson triple jumper Iana Amsterdam’s motivation. Now a senior, Amsterdam has never rested on her laurels throughout her college tenure, epitomized as much by her third career ACC championship in the triple jump that she recently earned. With an impressive 12th-place jump of 42-10.25 at the NCAA Championships last weekend, Amsterdam capped off a marvelous indoor season with a quality showing that was many years in the making, earning recognition as a Second-Team All-American as a result.

Amsterdam has always excelled on the track, dating to her time at Newark Tech High School in Newark, N.J. Originally a hurdler and a sprinter, she was keenly introduced to her true calling, the triple jump, by her high school coach, Eddie Green.

“Coach Green told me that his plan all along was for me to triple jump because he just thought I would be good at it,” Amsterdam recalled. “He eased me in with long jump, of course, and then let me try triple jump.”

Green’s prognostication proved to be as right as rain. She was twice named a high school All-American in the triple jump, finishing fifth at Nationals as a senior. Furthermore, even as Amsterdam embraced the triple jump as her calling card, she continued to excel in other events, too, winning multiple regional titles in the 55-meter hurdles and the long jump.

Amsterdam kept a watchful eye on head coach Mark Elliott’s Clemson program, as she was impressed by the conspicuous level of success. Opting to become a Tiger herself, and thus a part of something special, Amsterdam knew from the start that Clemson was her rightful home away from home.

“The team environment was so welcoming and friendly, and I knew that being around that environment would help me become better.”

Buying in wholly and completely to the philosophy of the Clemson coaching staff, Amsterdam utilized the tutelage of Elliott and jumps coach Chris Bostwick to improve in every aspect of her life as it related to track & field. Remarkably humble, Amsterdam is quick to credit her committed coaches for guiding her along her journey to becoming one of the nation’s top triple jumpers.

“When your head coach has so much faith in you,” said Amsterdam, discussing Coach Elliott’s impact, “you want to make sure that you’re doing your absolute best to make him proud.”

And make him proud she has. As a true freshman, Amsterdam took to the track with no trepidation whatsoever, quickly establishing herself as one of the team’s most versatile competitors. Earning a team-best time in the 60-meter hurdles, in addition to showing out in the jumps, she used the momentum accrued from her promising debut season to solidify herself as a superstar in the triple jump as a sophomore.

Winning gold in the triple jump at both the ACC Indoor and Outdoor Championships, Amsterdam was a force to be reckoned with as a sophomore, consistently upping her distances. A Second-Team All-American in 2015, she finished ninth at outdoor nationals to put a bow on a sensational campaign.

Despite improving on some of her personal bests as a junior, the competition proved to be especially challenging. And while Amsterdam was great in 2016, placing second and third at the ACC Indoor and Outdoor Championships, respectively, the grandiose success achieved as a sophomore was not enough to placate her. She knew that she had to do whatever it took to improve.

In preparation for her senior year, Amsterdam pushed herself like never before, paying close attention to the most minute of details in order to hone her skills in every facet possible. From dietary changes to practice routine tweaks, she committed herself to being the absolute best that she could be in her final season as a Tiger.

“I sacrificed more, worked harder at practice and paid closer attention to the things I was doing.”

Clearly, the hard work has paid off, as she reaffirmed herself as the conference’s top triple jumper this season, garnering a new personal best with a jump of 43-9.25 at ACCs that provided Amsterdam with her second indoor conference title and catalyzed her quest for a chance to showcase her phenomenal jumping skillset at nationals again. A fitting byproduct of her intense training leading up to the event, Amsterdam’s winning performance at the conference championships was a culmination of a relentless pursuit to return to the top.

“I knew that I had worked so hard that if I executed the way that I knew I could, it would have a good outcome.”

Not one to grow content, Amsterdam has molded her jumping career by constantly finding new ways to better herself. Whether it be switching the positioning of her legs on jumps while in high school to increasing the amount of time spent training and recovering over the course of her Clemson career, Amsterdam has given her all to a sport that is interwoven into the very fabric of her life.

“Jumping has definitely made me more disciplined. With jumping, it’s like muscle memory. You basically have to train yourself to do the same thing over and over well.”

Part of that commitment stems from the inspiration that Amsterdam is continuously provided through the close camaraderie that she shares with Bostwick. Serving as a life coach to his athletes as much as his role as an instructor, Bostwick instills patience and perseverance into his jumpers from the get-go, advising them to shoot for the stars but never ignore all of the necessary stops required for reaching them.

“Coach Bostwick cares a lot about his athletes. He puts his absolute all into everything we do. I love his coaching style.”

Like her coaches, Amsterdam is, without a doubt, especially goal-oriented and always pushes herself to reach certain milestones along that aforementioned trek to the stars. Taking it one hop, skip and a jump at a time, Iana has the NCAA outdoor track and field slate as the next item listed on her agenda.

With outdoor season around the corner, the final leg of her Clemson journey is nearing. Naturally, Amsterdam has a particular goal in mind for it, as visions of breaking the school record dance in her head. The mark is held by two-time Olympic participant Patricia Mamona, one of the track & field idols of Amsterdam’s youth, in the Clemson record book, and if Amsterdam’s continual ascension maintains its current trajectory, the triple jump superstar may very well challenge Mamona’s 46-foot plus mark before all is said and done.