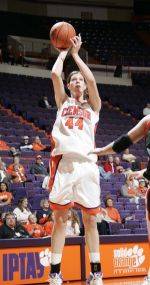 GREENSBORO, N.C. – Clemson senior Amanda Frist was named to the 2006 All-ACC Academic Women’s Basketball Team, as announced by the conference office on Wednesday. She became just the fourth overall Lady Tiger to earn the honor and the first since current women’s basketball Director of Operations Angie Cossey were Clemson’s other two representatives.

Frist, an early childhood education major, is expected to graduate in December of 2006 after completing her student-teaching during the upcoming fall semester. She also earned CoSIDA/ESPN the Magazine Academic All-District first-team honors earlier this year.

The native of Fountain Inn, SC averaged 10.7 points and 4.9 rebounds per game during the 2005-06 season, marks that ranked second on the team. Her .563 field goal percentage ranked fifth in the ACC, while her average of 1.62 blocked shots per game was listed sixth. During the season, Frist also played her way into four career top 10 lists in Lady Tiger history. She is listed fourth with 106 career starts and is tied for fourth for total blocks and blocks per game, posting 125 in 115 career games played. Frist also totaled 633 points over her career which ranks 10th all-time.