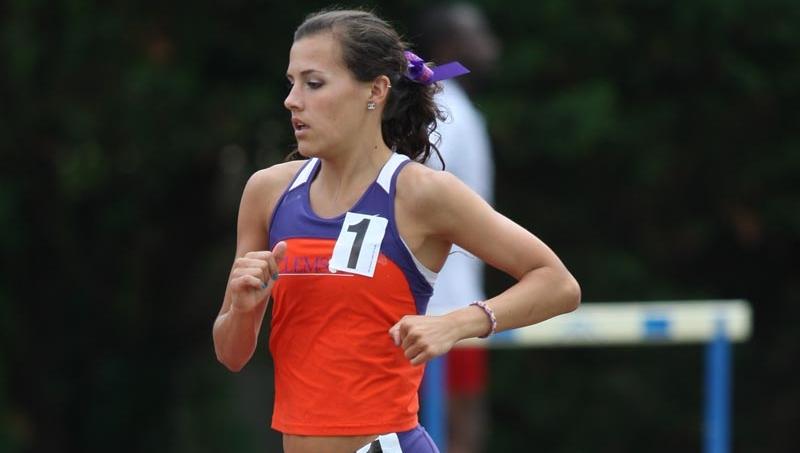 CLEMSON, SC – Clemson graduate Alyssa Kulik has been named the 2011 Atlantic Coast Conference Women’s Outdoor Track & Field Scholar-Athlete of the Year, the league announced Friday.  Kulik is one of six Clemson student-athletes, four women and two men, named to the All-ACC Academic Outdoor Team.  Whitney Fountain, Christy Gasparino and Marlena Wesh joined her on the women’s team.  From the Tiger men’s team, Ty McCormack and Torian Ware were named All-ACC Academic for outdoor season. Kulik, who graduated summa cum laude in modern languages (Spanish) and psychology in May, earned the ACC Scholar-Athlete award for the first time. It is her third consecutive All-ACC Academic honor for outdoor track & field.  She was a USTFCCCA first-team All-American in the steeplechase for a second straight season, finishing seventh at the NCAA Outdoor Championships earlier this month.  Last week, the Simpsonville, SC native finished 15th in the event at the U.S. Olympic Trials in Oregon. Gasparino, a health science major, earned the All-ACC Academic honor for a second straight outdoor season.  She advanced to the NCAA Championships for the first time in her career in the pole vault, finishing 19th in Des Moines.  Gasparino was all-conference in the vault in April. She set the school’s outdoor record with a jump of 13’5.25″ at the  UCF Invitational. Wesh was among Clemson’s most decorated student-athletes in 2012. She was the ACC Outdoor Track Athlete of the Year and USTFCCCA Southeast Region Performer of the Year.  In addition, she won Meet MVP honors for track after leading Clemson to its third straight ACC Outdoor Championship. Wesh was a first-team All-American in the 400 dash and with the 4×100 relay.  The psychology major is now two-time All-ACC Academic, having won the honor after the 2011 indoor season. Fountain was named All-ACC Academic for the second time in 2012. She was all-conference in the heptathlon as a red-shirt freshman, and competed at the NCAA Outdoor Championships with the 4×400-meter relay as well.  Fountain is a sociology major from Bronx, NY. On the men’s side, McCormack earned the accolade for the second straight outdoor season.  The language & international trade major from Gainesville, GA competed at the NCAA East Preliminary Round in the steeplechase, finishing 15th with a personal best. Ware, a freshman from Crawfordville, GA, was also named to the indoor All-ACC Academic Team, giving him a pair of honors as a rookie. He was a scorer in the high jump at the ACC Outdoor Championships and a qualifier for the NCAA East Prelims in the event as well.