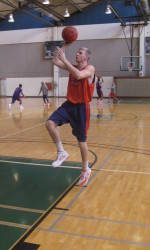 HONOLULU – With time to sleep in and hopefully adjust to the five-hour time difference, the Tiger men’s basketball team experienced its first full day in Hawaii on Wednesday. After a wake-up call and breakfast at 9:45 AM, the team headed out for practice at the University of Hawaii-Manoa at 12:15 PM.

The Tigers worked for an hour in Hawaii’s practice gym before making the short walk over to the Stan Sheriff Center for a light workout. ESPN’s announcing crews took in the Tigers’ 45-minute practice, including tomorrow’s team of Roxy Bernstein (play-by-play) and Doug Gottlieb (color).

It’s a busy time not only at the Stan Sheriff Center, but also at the University of Hawaii athletic complexes in general. On Saturday, the city of Honolulu will play host to Nevada and Southern Miss in the Sheraton Hawaii Bowl. Nevada worked out at Hawaii’s practice fields Wednesday at the same time the Tigers went through their practices. Southern Miss’ team is stationed at the Sheraton Waikiki, Clemson’s headquarters.

Clemson went through plenty of prep work on its opponent for Thursday, UTEP. The Tigers and Miners will go at it early tomorrow, with a 9:30 AM tipoff time locally. This will be the fifth meeting in history between the two schools. It won’t be the earliest tip in school history, however. Clemson faced Chaminade in the 1998 Maui Invitational at 9 AM.

Overall, Clemson basketball is making its sixth appearance in Honolulu for a regular season tournament. The Tigers played in the old Rainbow Classic four times, including 1980 when Bill Foster’s team won three games in three days by a total of six points. Two of the games were in overtime, and the team also upset Indiana under legendary coach Bob Knight and star point guard Isiah Thomas.

Another memorable moment from the Rainbow Classic was in 1993 when Clemson faced 20th-ranked Oklahoma State and star 7-footer Bryant Reeves. “Big Country” was a national name and Clemson center Sharone Wright was also looking to make a name for himself in the game. He did that with flying colors, as he posted 25 points, 13 rebounds and seven blocks. He held his counterpart to just eight points and three rebounds in a 68-65 victory for the Tigers.

This is Clemson’s first trip to Honolulu since 2004, when a young Tiger team with freshmen by the names of Cliff Hammonds, James Mays and Sam Perry beat Indiana State but fell to UAB and Georgetown. Clemson’s current Director of Basketball Operations, Dick Bender, was an assistant coach at Indiana State at the time of that matchup.

Following the team’s practices, everyone was given free time to eat lunch on their own and enjoy the 80 degree weather in Waikiki. Some players – including K.J. McDaniels, Tanner Smith and Bernard Sullivan – went to the beach and enjoyed some time in the clear blue Pacific Ocean waters.

The team gathered again shortly after 6 PM to head over to the Sheraton Princess Kaiulani for the Creation Show – a welcome banquet for the eight teams competing in the 2011 Diamond Head Classic.

ESPN SportsCenter anchor and former Hawaii resident Neil Everett gave a welcome speech to the eight teams in the tournament. Following a buffet dinner, the teams were treated to a dramatization of Polynesian history and culture through an array of dancing and singing. Without a doubt, the highlight of the show was the fire twirler at the end.

Upon leaving the Princess Kaiulani, team members were excited to look in the window of a local Macy’s store to see former rap artist and current actor Ice-T shopping with his wife, Coco.

The team returned to the hotel for a walk-through and scouting report on UTEP at 9 PM. It was an early curfew night because the Tigers and Miners are the first game of the tournament. It will be televised by ESPNU at 2:30 PM in Clemson. Check back with ClemsonTigers.com on Thursday for a full game recap, stats and notes.