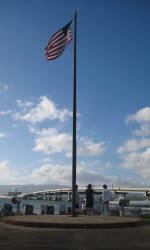 HONOLULU – Before we take a look at the team’s journey on this Christmas Eve, let’s first look back at a thrilling second round victory over the Southern Illinois Salukis in the Diamond Head Classic.

Clemson received heroic efforts from several players that made the late comeback (down 61-53 points with 4:27 left) possible. After the Salukis missed a free throw, Rod Hall took the ball up court and drove down the right side for a layup and was fouled. He made the free throw, forcing the Tigers’ first overtime game of the season. Hall ended the game with 18 points, by far a career-high for the freshman from Augusta, GA.

Devin Booker was outstanding, hitting 7-of-9 shots from the field and 2-of-3 field goals to match his season-high with 16 points. In case you missed it, two of those points earned the junior a place on ESPN SportsCenter’s top 10 plays last night.

Bryan Narcisse earned the start and was incredible with his energy. He grabbed a career-high 12 rebounds, and contributed seven points as well. Indicative of his effort throughout the game, he even smashed his orange goggles while grabbing a loose ball, forcing him to his backup pair.

And what more can we say about Tanner Smith? The Clemson graduate seemingly put the Tigers on his back in the second half and played with a “refuse to lose” will. Smith scored 26 points, most by any Tiger since Trevor Booker had 31 his senior season in 2009-10. He converted not only a pair of three-point plays, but also a rare four-point play in the second half.

The Tigers advanced to the fifth place game to take on Hawaii, who upset 14th-ranked Xavier late Friday night at the Stan Sheriff Center. Clemson has played Hawaii just once, but the Tigers beat the Warriors in the championship game of the 1980 Rainbow Classic in Honolulu. That was an overtime win by Bill Foster’s team.

Saturday began with breakfast at 9 AM, followed by a little bit of free time until practice at noon. Throughout the week, several members of the travel party hiked the trail at Diamond Head Crater and raved about the views. So, this very blogger decided to join the party and made the 0.8 mile walk up to the trail’s summit. From the top, you are able to enjoy breathtaking views of the Pacific Ocean, the city of Honolulu, Waikiki beach and the island of Oahu.

The trail was built in 1908 as part of the U.S. Army Coastal Artillery defense system. Be sure to click on our photo gallery for pictures of the crater, which is known locally as Lç’ahi.

After a short one-hour workout at the University of Hawaii, the team gathered again at 2:15 PM to drive over to the World War II Valor in the Pacific National Monument at Pearl Harbor. We were taken into a theater, where we were shown a film that explained the events that led to the Dec. 7, 1941 attack on the U.S. fleet at Pearl Harbor. Unfortunately, it was too windy to take a boat ride out to the USS Arizona, the battleship whose wreckage remains at the bottom of the harbor after being bombed that infamous morning.

Still, the team was able to gain an appreciation for the enormous number of individuals who sacrificed their lives in defense of the United States in that very location. It was a humbling experience, to say the least. Check out our photos from the time we spent at Pearl Harbor.

The team returned to the Sheraton Waikiki about 5 PM, where it had free time until gathering again for dinner and a walk-through in preparation for Sunday’s game. It will be Clemson’s first-ever game on Christmas Day.

Thanks to all who have followed the Tigers’ trip to Hawaii through our blog. Last but not least, we want to wish a Merry Christmas to all Tiger fans, who we hope will find time to tune in to ESPNU on Sunday at 4:30 as we take on the University of Hawaii and try to grab a second win in the tournament. ClemsonTigers.com will once again have full postgame coverage.