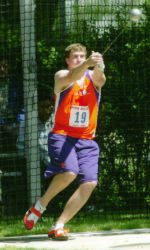 Alge was a second-team ESPN The Magazine Academic All-American after graduating in May with a degree in Biosystems Engineering. He was an Academic All-District selection this spring and also an All-Academic honoree in 2005 by the U.S. Track & Field and Cross Country Coaches Association (USTFCCCA). Alge finished his career ranked second in Tiger record books in the hammer throw.

Kessler, a senior majoring in Packaging Science, was one of Clemson’s top performers in the pole vault this season. He qualified for the NCAA East Region Championships during outdoor season. He cleared a personal best 17’1″ at that meet and finished sixth, one spot shy of an automatic berth to the NCAA Championships.

Knapp, a senior transfer into the program majoring in Human Resource Development, was the team’s top performer this season in the outdoor 800m. His top time was 1:51.14 at the ACC Championships.