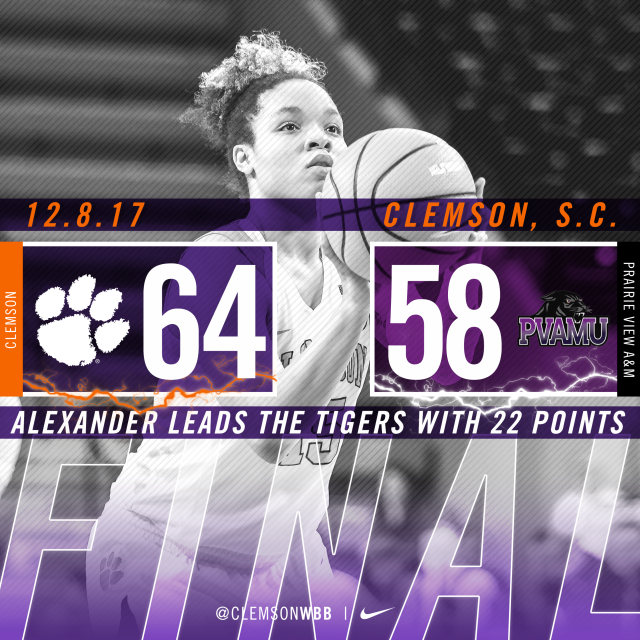 CLEMSON, S.C. – Sophomore Jaia Alexander set a new career high for the second time this season, scoring 22 points en route to helping the Clemson women’s basketball team to a 64-58 win over Prairie View A&M on Friday evening at Littlejohn Coliseum. The Tigers also recorded 13 blocked shots in the game, a figure that is tied for third in school history, and improved to 8-2 with the win, while the Panthers dropped to 2-6.

After a slow start in the first quarter, the Tigers came back with a vengeance in the second, outscoring the Panthers 26-8 in the period on a 12-for-19 (63.2%) field goal shooting performance. Alexander led the charge with seven points in the quarter, while junior Aliyah Collier and sophomore Kobi Thornton had six apiece. Thornton also had four blocked shots in the first half, and the Tigers had nine as a team.

Alexander finished the game with the career-high 22 points on a 7-for-13 field goal shooting performance which also included 8-for-11 from the free throw line. She also pulled down six rebounds and tallied three steals and two assists in the contest.

Thornton was second on the team in scoring with 15 points, and posted a double-double with 10 rebounds. It was the first double-double of the season for the sophomore, and the third of her career. Thornton also set a new career best with five blocked shots in the game. Collier and junior Danielle Edwards were also in double figures with 13 and 10 points, respectively. Collier was one rebound shy of a double-double with nine, and also dished out four assists.

The Tigers now have nine days before their next game, as next week is exam week for Clemson University. Clemson returns to the court on Sunday, Dec. 17 against Jacksonville State at 2 p.m. at Littlejohn Coliseum.