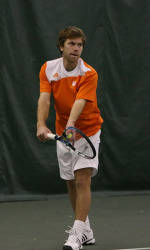 CLEMSON, SC – The 19th-ranked Alabama Crimson Tide picked up a 5-2 victory over the Clemson Tigers in a men’s intercollegiate tennis match in Clemson, SC on Sunday afternoon.

Alabama improves to 6-1 this season, while Clemson falls to 4-4 this year. The Tigers are ranked 61st in the latest ITA poll. Alabama is ranked 19th nationally by the same poll this week.

The Crimson Tide won the initial point by picking up victories in two of the three doubles matches. The Tigers responded by evening the score courtesy of Carlos Alvarez’s 6-3, 6-2 win over Alabama’s Saketh Myneni in number one singles.

The Tigers answered back with a victory in number three singles, as Rok Bizjak knocked off the Crimson Tide’s Michael Thompson 6-1, 6-2 to tie the score at 2-2.

In number four singles, Billy Mertz of the Crimson Tide picked up a win over Kevin Fleck of the Tigers 6-2, 6-2 to give Alabama the lead for good.

The Crimson Tide’s Dan Buikema defeated the Tigers’ Kevin Galloway 6-3, 6-4 in number five singles to clinch the match for the visitors.

In the most compelling match of the afternoon, Michael Jung of Alabama defeated Taylor Cohen of Clemson 5-7, 6-2, 7-6 (10-4) in number six singles for the Crimson Tide’s fifth and final point.

This was the 15th meeting between Clemson and Alabama on the tennis courts. Alabama now leads the overall series 11-4. The series began on April 1, 1941 with the Crimson Tide winning the inaugural match 5-2 that year in Tuscaloosa, AL.