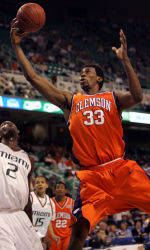 Portsmouth, VA – Clemson center Akin Akingbala competed in the 54th annual Portsmouth Invitational over the weekend. The 6-9 native of Lagos, Nigeria led his Holiday Inn Portsmouth team to the championship game of the eight-team tournament. He was named to the all-tournament team after averaging 12 points and six rebounds per game during the event.

In total, 64 college seniors and professional basketball hopefuls competed in the three-day event in front of NBA scouts and representatives. Akingbala’s team was made up of notable players such as Lamar Butler (George Mason), Vincent Grier (Minnesota), Tim Smith (East Tennessee State), and C.J. Watson (Tennessee).

Akingbala scored 15 points and grabbed five rebounds in Thursday’s opening round win over Norfolk Sports Club, a team that featured three players Akingbala faced during the 2005-06 season. He shot 6-7 in that game and also led the club with three blocked shots. In the second round, Akingbala posted six points and six rebounds in a win over MD Designs. Once again, he led his squad with a pair of blocked shots.

In Saturday night’s championship game, Holiday Inn fell to Portsmouth Sports Club by a score of 104-88. But Akingbala did his part, scoring 15 points and pulling down seven rebounds. He shot 6-9 from the field and also had a team-best three blocked shots and two steals.

For the tournament, Akingbala ranked second among all players in field goal percentage after shooting 14-21 (.667) from the field. He also ranked third among all tournament players in blocked shots with an average of 2.67 per game.