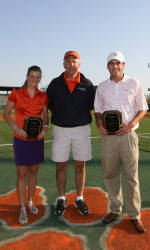 CLEMSON, SC – Golfer Ben Martin and women’s tennis player Josipa Bek have been named AgSouth Homegrown Student-Athletes of the Year at Clemson University. The award takes into account performance on the field and in the classroom. Both student-athletes were honored prior to the Clemson vs. Western Carolina baseball game on Wednesday night, April 14.

Martin is the leader of Clemson’s 19th ranked golf team with a 72.78 stroke average this year. He was co-Medalist at the Furman Invitational on March 21 and is ranked among the top 50 college golfers in the nation by Sagarin computer rankings. An accounting graduate with a 3.45 GPA, Martin recently competed in The Masters last week and will lead Clemson to the ACC Tournament next week. He was also the recipient of a Weaver-James-Corrigan Scholarship by the ACC on Wednesday. He is already a three-time Academic All-ACC performer.

Bek, a sophomore from Osijek, Croatia, is Clemson’s top singles and doubles player. Currently, ranked 19th nationally in singles, and #9 in doubles, Bek has excelled in many facets of the game. The Pre-Business major is known for her fierce competitive nature and her strong leadership qualities, which have helped clemson to a 19-4 record and a #8 national ranking.

During the fall season, Bek won the ITA Carolina Regional singles title, her second straight championship at that event. She also earned automatic entry into the ITA All-America Championships as well as the ITA National Indoor Championships. With her 34-10 record as a freshman, she notched the 10th-most wins in a single season in Clemson history.

Click here to see all of the AgSouth Student-Athlete of the Week honorees for the 2009-10 academic year.