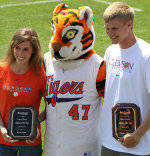 Men’s track and field athlete Miller Moss and women’s cross country and track runner Kim Ruck have been named the 2010-11 AgSouth Homegrown Student-Athletes of the Year at Clemson University. The award takes into account performance on the field and in the classroom. Both student-athletes were honored prior to the Clemson vs. Maryland baseball game on Sunday, April 10.

Moss was the 2011 NCAA Champion in the heptathlon. His score of 5,986 points recorded at the national indoor meet was one of the top five point totals in the event in NCAA history. Moss also won an ACC title in the heptathlon in 2011, and was a member of the Tigers’ ACC Championship 4x400m relay team. He graduated in December of 2010 with a degree in parks, recreation and tourism management.

Ruck competed in the 2010 NCAA Cross Country Championships, becoming Clemson’s first female qualifier for the national meet in 17 years. She earned All-Southeast Region honors in cross country and was named to the All-ACC Academic and USTFCCCA All-Academic team for the 2010 season. Ruck earned All-ACC honors in the 3000m and 5000m at the 2011 ACC Indoor Track & Field Championships.

Click here to see all of the AgSouth Student-Athlete of the Week honorees for the 2010-11 academic year.