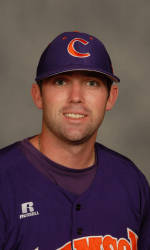 Boyd hit .550 with an .850 slugging percentage and .625 on-base percentage to lead Clemson to a 5-0 record this past week. He went 11-for-20 with four doubles, one triple, eight RBIs, six runs, four walks against only one strikeout, and one stolen base. He had at least one hit in all five games and at least two hits in four games. He also had 12 putouts without committing an error.