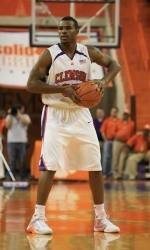 Booker was the leading scorer in Clemson’s victories over Alabama (66-59) and N.C. State (63-51) last week, helping the Tigers improve to 16-0 on the season and 2-0 in Atlantic Coast Conference play. Against the Crimson Tide, the junior scored 19 points and added five rebounds and three blocked shots in the contest.

Against N.C. State, Booker posted 23 points on a 9-for-17 field goal performance. He also recorded six rebounds, six blocks and three steals in Clemson’s win over the Wolfpack.