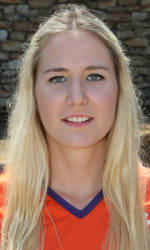 Yaz averaged 3.67 kills per set and hit .383 from the outside in Clemson’s weekend sweep of Boston College and Maryland, which upped the Tigers’ record to 5-2 in league play. She also added six total aces against no service errors for an average of 0.67 per set, and had six blocks. On Saturday against the Terrapins, Yaz had nine kills in 15 swings in the final two sets to help the Tigers clinch the win. For the season, she’s hitting .253 and averaging 2.75 kills per set and 0.32 aces per set.