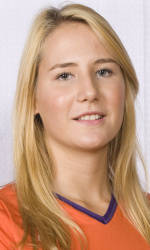 Yaz continued her torrid pace, recording her 16th and 17th double-doubles of the season in four set wins over Virginia (16 kills, 16 digs) and Virginia Tech (19 kills, 11 digs). Fifteen of her 17 double-doubles have come against ACC competition. On the weekend, the outside hitter registered a .322 hitting percentage, while averaging 4.38 kills and 3.38 digs per set. She had only seven attack errors in 87 swings, and put down 35 total kills. Defensively, in addition to the 27 digs, her serve receive was tremendous, with only one reception error in 60 opportunities, good for a 98.3% success rate on her serve passes.