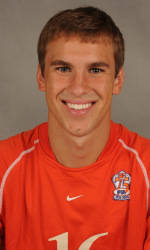 Thornton was named to the Atlantic Coast Conference Men’s Soccer All-Tournament Team following his performance at the 2009 conference tournament. The senior forward scored both goals in Clemson’s 2-0 win over Virginia Tech in the first round of the tournament on November 10.

Thornton led the 2009 Tigers in scoring with eight goals and two assists for 18 points. He is the first Clemson player to be named to the ACC All-Tournament team since the 2005 season.