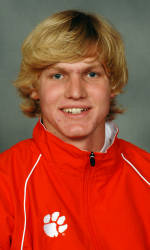 Moss won the heptathlon title at the JRF Multi-Event Challenge last weekend, marking the first time in the five-year history of the meet that a Clemson athlete claimed the heptathlon title. Moss scored 5,184 points over the seven-event competition, just 16 points shy of an NCAA provisional qualifying mark. He also moved into fourth place on Clemson’s all-time heptathlon performance list with his point total from this weekend.

The Sumter, SC product had personal bests in the 60m hurdles and pole vault before finishing strong with a time of 2:47.14 in the 1000m run. Moss’ time in the high hurdles was 8.95, seventh-best among the competitors. He again showed his ability to battle after clearing two pole vault heights on his final attempt and eventually ended up with a personal best clearance of 14’1.25″.