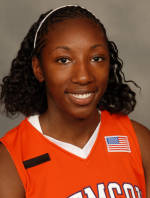 With six seconds remaining in the game, Wright hit a three pointer to give the Lady Tigers a 69-68 victory over Northwestern on Wednesday, December 3 in the ACC/Big Ten Challenge in Evanston, IL. Wright scored a career-high 22 points in the game and was 6-for-8 from behind the arc. The six threes tied Clemson’s single game record for three-point field goals made in a game.