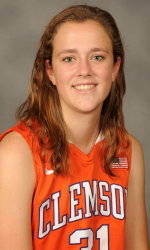 Gramlich was named the ACC Women’s Basketball Rookie of the Week for her play in Sunday’s contest against North Carolina Central, where she notched 20 points. Gramlich tied a school record with six made three-pointers, needing just eight attempts to knock them down. She scored a career-best 20 points overall in the contest, and needed just 25 minutes to notch her first career 20-point output.