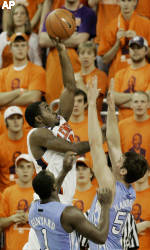 Rivers helped the Tiger men’s basketball team to an 87-61 victory on the road against SEC foe Alabama on Tuesday and led the team in scoring in its 90-88 overtime loss to number-one ranked North Carolina Sunday night.

The junior recorded 15 points and eight rebounds against the Crimson Tide, turning in a seven-for-11 field goal performance. Against the Tar Heels, the Charlotte, NC native posted a team-high 24 points and was four-for-seven from three-point range. Rivers also added six rebounds in the contest.