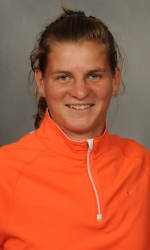 Bek went undefeated on the weekend as Clemson split with #2 North Carolina and #7 Duke. The sophomore defeated North Carolina’s 32nd-ranked Sanaz Marand at flight one singles after dropping a first set tiebreaker, and teamed with Ina Hadziselimovic to defeat #11 Marand and Grabinski, 8-2, at flight one doubles. In Clemson’s upset win over #7 Duke, Bek and Hadziselimovic defeated #42 Nze and Granson, 8-5. Bek then went on to roll Nze, 6-3, 6-0 in singles as the ninth-ranked Tigers moved to 19-4 overall and 7-2 in the ACC.