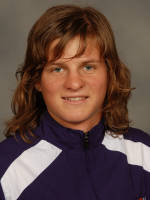 Bek helped the Tiger women’s tennis team advance to the NCAA Sweet 16 by winning two singles and two doubles matches in the NCAA First and Second Rounds in Clemson last weekend. On Friday against Winthrop, Bek and partner Ina Hadziselimovic defeated the Eagles’ flight two doubles team 8-1. In singles play, Bek moved up to the number-one slot for the match, where she defeated Liza Zaytseva 6-1, 6-1.

In the second round on Saturday, Bek and Hadziselimovic paired to defeat North Carolina’s number-two doubles team by a score of 8-5. Back in her normal flight two singles position, Bek then downed the Tar Heels’ Katrina Tsang in straight sets (6-1, 6-2.) On the year, Bek improved to 32-8 in singles play (21-5 in dual matches) and with Hadziselimovic, improved to 15-6 in doubles.