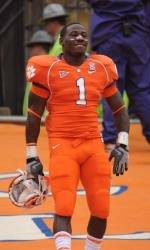 Davis finished the day with 91 rushing yards on 24 carries. He also had 17 yards receiving. For the season, Davis has 725 yards on 159 carries with 11 touchdowns. He has 3,855 rushing yards for his career, and needs only 112 yards rushing to break Raymond Priester’s career rushing record.

Davis finished his career with 85 carries for 377 yards against South Carolina, a 4.4 average. Davis made the 42nd start of his career against the Gamecocks on Saturday, tying Raymond Priester for the Clemson record for most starts by a running back.