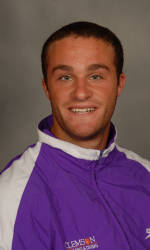 Giambra broke his own school record in the three-meter diving competition against N.C. State on Saturday, winning the event with 376.05 points. The point total is also a new record for McHugh Natatorium and is the seventh-best score for the event in the Atlantic Coast Conference so far this season.

The junior diver took second place in the one-meter board against the Wolfpack with 307.43 points. He had previously set the school record in the event (335.03) against North Carolina two weeks ago.