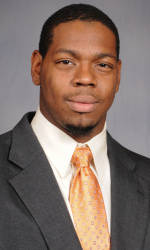 Bowers had three sacks and four tackles for loss among his six tackles in leading Clemson’s defense in the Tigers’ 31-7 victory over Maryland on Saturday. Bowers’ sack total against Maryland was a career high and he became the first Tiger since 2001 to record three sacks in a game. Bowers now has nine sacks and 15.5 tackles for loss for the season, best in the nation in each category. The defensive end was named one of two National Defensive Players of the Week by the College Football Performance Awards for the performance against the Terrapins.