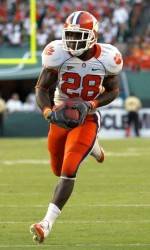 Spiller had a Clemson record 310 all-purpose yards in the Tigers’ 40-37 overtime victory at eighth-ranked Miami (FL) on Saturday. He recorded 125 yards on three kickoff returns, 104 yards on six receptions and 81 yards on 14 rushing attempts. He scored on a 90-yard kickoff return and a 56-yard pass from quarterback Kyle Parker.

His 90-yard kickoff return at Miami was the sixth of his Clemson career, an ACC record, and it was his seventh total kick return for a score as a Tiger. That gave him the ACC record for overall kick returns for scores. He and Steve Suiter of Maryland had six apiece entering Saturday’s game.