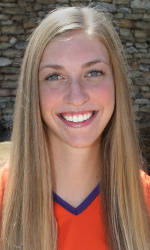 Rand was named the Most Valuable Player of the College of Charleston Invitational last weekend, helping the Tigers to wins over South Carolina (3-0), Winthrop (3-1) and College of Charleston (3-2) in the tournament. Rand had 36 kills on the weekend, including a career-high 18 against the Cougars on Saturday to lead all players. She hit .500 for the weekend, with just three errors. She also led the Tigers with 11 blocks, and added two aces for good measure.