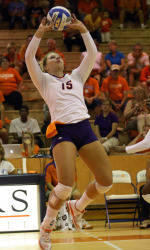 CLEMSON, SC – The Clemson women’s volleyball team opened the 2011 season with an energetic, 3-0 (25-19, 25-13, 25-21) win over the Loyola University Maryland Greyhounds on Friday night in Jervey Gymnasium. Sandra Adeleyehad an historic night offensively, going for 15 kills in 17 swings, which registered as the third-best hitting night in school history at .882.

“We had a little snafu in the first set with our substitution, but I was really proud of how well they handled it and how mature they were on the floor,” said Jolene Jordan Hooverafter the contest. “Sandra was just awesome, and she and Hannah are connecting well. She had a great night, and they looked really good together.”

The Clemson offense took a while to get going, but got progressively more prolific as the night went on, as the hitting percentage improved in each set. Clemson hit .333 in the first set, .391 in the second, and finished with a .448 mark in the third.

Faye Luka and Tina Catanach led the Greyhounds with eight kills apiece, but needed a combined 54 swings to do it, while also registering 13 errors. Setter Lauren Anderson led all players with 24 assists.

Setters Hannah Brenner (21 assists) and Kamryn Sherman(16 assists) were efficient on the night in spreading the ball around for Clemson. Five Tigers finished with eight or more swings, and none had more than 17.

For Adeleye, it was a tremendous performance, as she was nearly perfect on the night. The Tigers were able to find her for a variety of paths to the net, and she finished in an incredible way. Her .882 percentage ties her for third with fellow middle Alexa Rand, who posted the same mark against North Carolina in 2009.

Rand finished the night in an efficient manner as well, quietly going for six kills in eight attacks and getting in on four block assists. Other top performances included seven kills apiece from Natalie Patzin and Mo Simmons, and freshman Kristin Fausthas three kills, three aces, and a match-high 9 digs in her debut.

The Tigers put the clamps on defensively as well, holding the Greyhounds to .108 hitting on the night, while also registering five blocks. Clemson was extremely efficient on Loyola’s serve as well, and we able to side-out in 43-55 (78%) of the greyhound serves.

Clemson didn’t trail at all in either of the first two sets, opening up a quick 10-3 lead in the firstbehind a pair of aces from Faust and two kills apiece from Adeleye and Patzin. Loyola got back to within five at 12-7 and again at 17-12, but could get no closer. Simmons finished the set with a thunderous attack from Brenner.

Set two was more of the same, with the Tigers jumping out to a 9-4 lead, largely on the back of a few Loyola errors. With an 18-12 lead, Clemson reeled off six straight points to take a 24-12 lead, and the Tigers closed the set on a Loyola attack error.

The third set was much tighter, as the greyhounds continued to fight and refused to let Clemson get comfortable separation like it did in the first two sets. The teams traded points for much of the set, which featured 16 tie scores and three lead changes. After a Hoover timeout at 21-21, Brenner found Patzin for a kill, and then Adeleye on consecutive plays, both results in points for the Tigers. Ozdemir finished the match as Loyola couldn’t quite receive her serve, and the ball bounced out the back of the court.