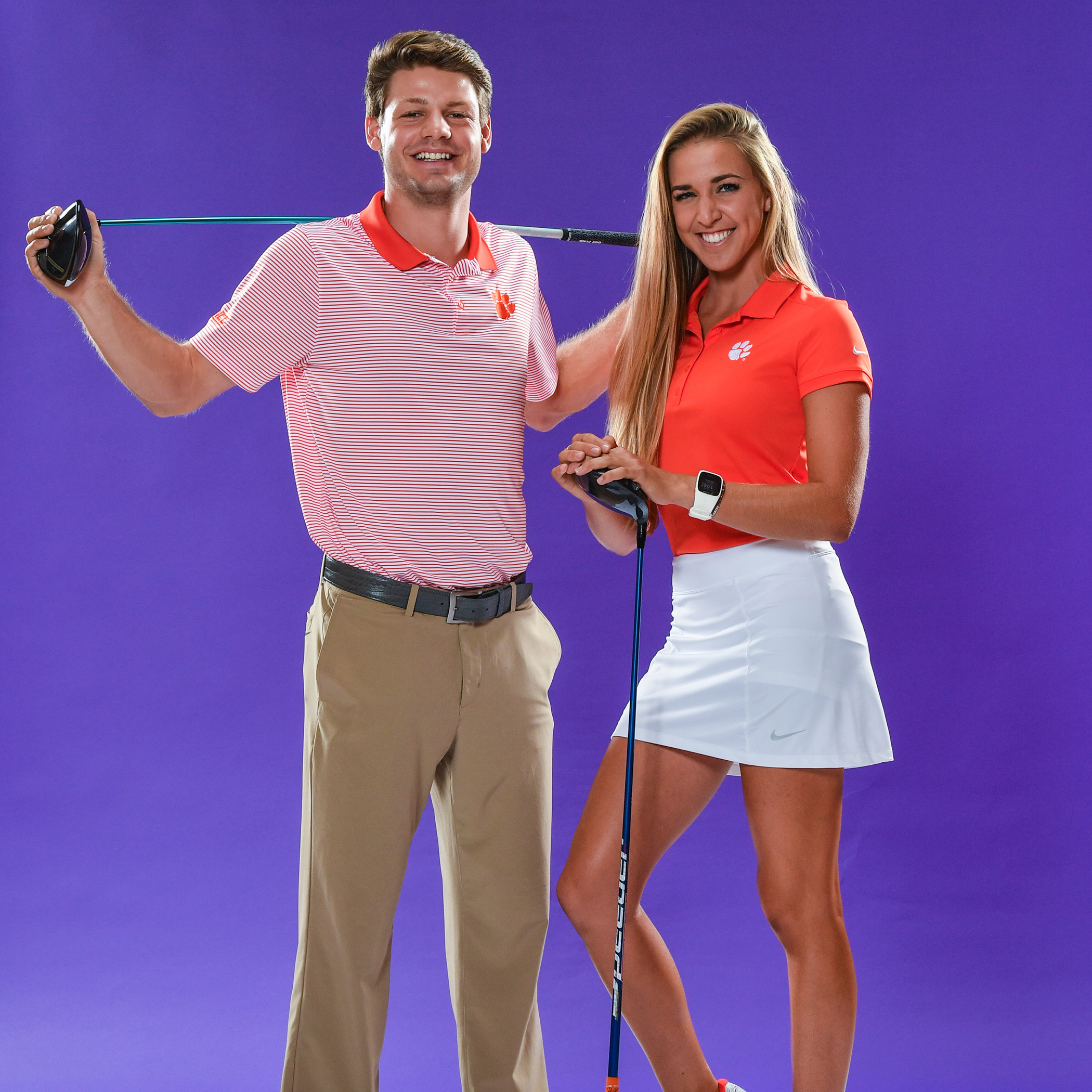 Address Success On & Off the Course

The cover photo of Orange: The Experience this month depicts the happy faces of sophomore All-American men’s golfer Doc Redman and senior (soon to be graduate) women’s golfer and Academic All-American Marisa Messana.

Having covered the Tiger golf program for nearly 40 years, I can’t think of two golfers who represent the Clemson golf program, past and present, on and off the course, any better.

The tenets of the Clemson program have featured consistent success on the course and off. The off-the-course success centers around academic data, including graduation rate. Multiple times over the last 10 years, the Clemson men have been honored by the NCAA for their Academic Progress Rate (APR), and the Clemson women have been on the list for a 100-percent rating both years it has been eligible.

Redman, in his second year at Clemson, led the Tigers in stroke average last year with a 70.4 average, second best in school history. He won two tournaments in the fall, the first Clemson freshman to do it, and had eight top 10s, a record for a Tiger freshman.

In the summer, Redman received national headlines by winning the United States Amateur at the famed Riviera Country Club near Los Angeles, Calif. He was brilliant in the clutch, as he won five of his six matches on the 17th, 18th or extra holes. That included his championship victory over Doug Ghim (Texas) on the first playoff hole.

In the classroom, Redman was named to the All-ACC Academic team with a GPA over 3.8. And he is enrolled as a math major, one of just two out of over 500 Clemson student-athletes in that major. Redman comes by his interest in academic numbers naturally, as both of his parents have doctorate degrees.

After winning the U.S. Amateur, just the second Clemson golfer to win the country’s most prestigious amateur tournament, Redman was surprised one morning in September when he was honored by his classmates and professor for winning the tournament and for his excellence in the classroom.

Head coach Larry Penley brought the U.S. Amateur trophy with him and gave the class a history lesson on what the award meant to Redman and Clemson.

Messana doesn’t have the on-course accomplishments of Redman, but she does have him beat in the classroom. In fact, no one had her beat at the NCAA Women’s National Tournament at Sugar Grove, Ill., in May.

Each year, the NCAA presents an Elite 90 Award to the student-athlete at the national tournament of each sport who has the highest career GPA. Messana had just finished her sixth consecutive semester (plus a few summers) with a 4.0 GPA. She was the only women’s golf upperclassman at the NCAA Tournament who could make that claim.

That was a proud day for women’s head coach Kelley Hester. First, just being at the NCAA National Tournament in just the fourth year of the program was a significant accomplishment, especially in her first year with the program.

A communications major, Messana has been named an academic scholar by the Golf Coaches Association each year, and she has also been named to the All-ACC Academic team all three of her previous seasons.

On the course, Messana has played in more tournaments than any other Clemson women’s golfer. She is in her fourth year as a starter and has seen the program grow to the point where the Tigers are competing with the best programs in the nation. In addition to the top-20 national finish at the NCAA Tournament last year, Clemson finished second at the Schooner Fall Classic at Oklahoma earlier this fall.

Just a week before Redman was helping Clemson to a second-place finish at the NCAA regional near Nashville, Messana was Clemson’s top player on the final day of the NCAA Regional at Georgia.

In the women’s tournament, the top-six teams in the four regionals advance to the NCAA National Tournament, meaning only 24 teams reach the championship event.

Messana and the 10th-seeded Tigers were near the cutline entering the final round, and all knew there would be a strong battle down the stretch. Among the group was host Georgia.

It was a remarkable final round for Messana, who had the best score of the day among Tigers for the first time all year. The native of Florida was the first Tiger off the tee on Wednesday, and she set the tone.

“Marisa was +1 after nine holes, and she seemed frustrated,” said Hester after the round. “She thought she should be scoring better. But I told her some days good is good enough. Just be patient.”

Messana had two birdies on the back nine and shot even par to finish with a 73. Fittingly on a number of fronts, she played the par four holes at 4.0 for the round, the same as her career GPA.

Clemson beat six top 25 teams at the regional in Athens, including No. 8 Georgia on its home course. It was quite a victory for Hester, who had coached the Bulldogs to the NCAA National Tournament five years earlier.

As of late October, both the men and women’s programs were ranked in the top 25. It has been a customary place for the Clemson men for many years.

While the history of the Tiger men’s program dates to 1930, when a local clergyman coached the team, the Tigers really didn’t burst onto the national scene until Bobby Robinson became head coach in 1975. Working with a small budget, Robinson recruited some outstanding talent from the Carolinas, including Goldsboro, N.C., native Clarence Rose in 1978.

Rose brought the Clemson program to new heights and became the school’s first All-American. That 1980 spring, Robinson coached the Tigers to its first NCAA National Tournament and a No. 12 ranking.

In 1982, a team that included All-American Dillard Pruitt and Tony Nimmer, the father of current Clemson standout golfer Bryson Nimmer, won its first ACC title. The next year, the same group led the Tigers to a fifth-place NCAA national finish in California.

After that spring, Robinson resigned as head coach to spend more time in athletic administration, and he hired Penley, then the assistant, as head coach. Two years later, Robinson became the athletic director.

“I was a freshman in 1986 when Larry was the head coach and Bobby Robinson was the athletic director, “ said Kevin Johnson, who was inducted into the Clemson Ring of Honor in October.

“That was a great move for Clemson golf, because Larry is a great coach. People underestimate what it meant to have Mr. Robinson as our athletic director. He had been the golf coach and cared about the golf program.

“When Larry wanted something for the golf program that made sense, Mr. Robinson was all for it. As a player, it is a good feeling to have an athletic director who used to be the golf coach. His door was always open to us.

The program continued to flourish in the 1980s with Johnson and Chris Patton leading the way. Patton won the U.S. Amateur, then made the cut and finished 39th at the 1990 Masters. The publicity he brought to the program through his success at the Masters was impossible to quantify.

The highlights continued during the 1990s. Charles Warren won the 1997 national championship at Conway Farms near Chicago when he shot a five-under 67 in the final round. He won in a playoff and helped the Tigers finish third as a team.

That 1997 team finish began a run of seven consecutive top-10 finishes for the program. The streak culminated with a national championship at Oklahoma State’s course (Karsten Creek Golf Club) in 2003.

That was one of the great victories in Clemson history in any sport, as Oklahoma State had been the top program the last 20 years. This was a tournament it had been planning to win for years.

But a Clemson team that featured four All-Americans, including senior D.J. Trahan, beat the Cowboys on a hot final day by two shots.

The accomplishments individually and as a team have continued. Trahan was named national player-of-the-year in 2002 and was a two-time first-team All-American.

Kyle Stanley joined Trahan as a winner of the Ben Hogan Award and is now a mainstay on the PGA Tour. Lucas Glover, a three-time All-American at Clemson, won the 2009 U.S. Open and continues to bring attention to the Tiger program through his success on the PGA Tour.

Five former Tigers will play on the 2018 PGA Tour. Glover and Stanley will be joined by Ben Martin, Sam Saunders and Jonathan Byrd. Byrd was a two-time All-American on the course and in the classroom. He is considered one of the most respected student-athletes in any sport in school history. Byrd and Warren are members of the Clemson Ring of Honor.

The women’s program is only in its fifth year, but it is certainly making its own strong foundation.

It took the program about six months to reach a No. 10 ranking under first-year head coach J.T. Horton. Ashlan Ramsey came to Clemson as a top-ranked player and won two tournaments that first year, helping the Tigers to three second-place finishes and the NCAA Tournament.

The program has reached the NCAA Tournament three of the first four years, including last year’s national tournament appearance. The 2017 Tigers won the program’s first tourney with a victory at the UCF Challenge.

With all five starters returning for 2017-18, the outlook for the Tiger women is strong. Clemson’s national schedule gives Hester’s team every chance to prepare to return to the national tournament.

With student-athletes like Redman and Messana leading the way, Clemson’s tradition of excellence in golf will only get stronger in the future.