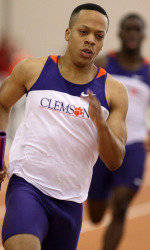 CLEMSON, SC – Clemson sprinters and hurdlers claimed three out of four victories in the men’s and women’s 60 meter dash and 60 meter hurdles on Friday at the Tiger Paw Invitational. In all, Clemson athletes won four events on Friday and personal bests were established by several student-athletes, most notably Spencer Adams who closed in on an NCAA automatic qualifying time in the 60 hurdles.

“We ran into some adversity in the middle of the meet, because our kids were really pressing and trying to do well in front of the home crowd,” said Lawrence Johnson, Clemson’s Director of Track & Field. “Our kids were able to gather themselves, calm down, and produce some results. We’ve talked about being resilient all year long, and this group has shown that they will keep plugging away.”

Clemson won the men’s and women’s 60m dash Friday evening. Stormy Kendrick was consistent in the women’s 60m dash, clocking 7.28 in the first two rounds before winning with a time of 7.29 in the final. In the men’s race, junior Justin Murdock clocked a 6.65 and ran away with the victory in the final. It was a lifetime best for the Pasadena, MD native. His time puts him in a tie for seventh in the Clemson record books.

Spencer Adams was dynamic in the men’s 60 hurdle final. The red-shirt sophomore from Charlotte was consistent in the first two rounds of the event, clocking 7.85 in both. He turned it up a notch in the final and beat former Oklahoma All-American Ronnie Ash, who was running unattached Friday. Adams turned in a personal best 7.73, just shy of an automatic NCAA bid. His time tied for third-best in Clemson history with Todd Matthews (2001).

“Every other year, Spencer’s time would put him in the NCAA field,” Johnson said. “It’s a good mark, but several guys nationally have run well so far this season. He’s going to face a tough battle at the ACC championship meet in a couple of weeks. I saw a different focus in him today, and I’m really happy for him.”

Alyssa Kulik edged teammate Kim Ruck for the women’s mile championship. Kulik posted a time of 4:57.41, while Ruck came across the line right behind in a time of 4:57.76.

Brittney Waller was third in the invitational women’s weight throw. The sophomore from Greenville, SC posted a mark of 65 feet and was the top collegiate finisher, behind only a pair of unattached athletes. In the men’s invitational, senior Alex Padgett took third with an outstanding mark of 65’0.5″, just under his personal best for the event.

In other field event action, freshman Christy Gasparino cleared a season-best 11’9.75″ in the open pole vault and finished runner-up in that section. Fellow freshman Lauren Terstappen will jump for Clemson on Saturday in the invitational section at 12:00 PM.

The meet continues on Saturday with the final day of action. The first event is the open women’s shot put at 9:00 AM. The first track event is scheduled for 11:00 with the women’s distance medley relay.