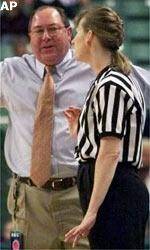 Some fan questions submitted last week were used during Sunday’s interviews. Check and see if your questions were answered.

Question from Amy G. Franklin (Charlotte, NC) for Clemson coach Jim Davis: What impact has having Barbara Kennedy-Dixon, who is such an integral part of the Clemson Women’s basketball family and history, had on your drive for success?

Davis’ answer: “When I first became the head coach at Clemson, I kept seeing this picture as I rounded the corner going into my office of someone with a smile from ear to ear, so I asked the administration who that young lady was and where she was now. I actually hired her and brought her back to Clemson as an assistant coach for my first four years at Clemson. Just Barbara Kennedy-Dixon the person, she is such a dynamic young lady, such a caring lady. Absolutely genuine, there is nothing fake about her, she is as solid a person I’ve ever met in my life. She has a passion for Clemson University, a passion for Clemson women’s basketball that does help to drive, not just me, because she’s such a great role model for our young ladies, and as long as I’m at Clemson I want Barbara Kennedy Dixon by my side.”

More Davis: “Chrissy (Floyd) has been our leading scorer for the past three years. I really believe that we are so much better offensively than we were last year simply because we’ve got a couple of players that had to play out of position last year. Julie Aderhold, for one, sacrificed her 3-point shooting abilities by playing the power forward position. She’s nowhere close to being a power forward, so we move her back out to her comfort zone where she can shoot 3s and spread the defenses. Maggie Slosser, we had to play her at the center position last year. At 6-1, barely, she was playing out of position. She fought her heart out while she’s really a power forward. And Amanda White, even though she’s only a freshman, I think she’s going to be a force inside with offensive rebounding and putting it back in. Khaili Sanders, a redshirt freshman, has really nice shooting touch, and Kanetra (Queen) will be able to generate a lot of offense with her defensive prowess. We’re a much better fast-break team with a lot of players that can finish.”

“Where people pick you is other people’s opinion of you and impression of your team; where you finish is what you think of yourself and your impression. We look at (being picked middle of the pick every year) as a challenge, but at the same time, it’s news media and it’s just opinion and we don’t pay much attention to games that are won and lost on paper because we know they’re won and lost on the hardwood. These young ladies are working extremely hard right now. This league’s going to be as competitive as it’s been maybe in my sixteen years in the league now, from top to bottom. I don’t think there’s an easy win, a gimme win in the whole conference. There will be 16 games that Clemson will be involved in, and any game can go either way.”

“I can’t picture anybody going undefeated throughout this league this year. As good as Duke is, that’s a formidable task.”

“Clemson is quite unique in that of the four Clemson members of the 50th Anniversary team, three of them travel in our travel party. With Chrissy and Barbara Kennedy-Dixon and Itoro Umoh-Coleman.

Question from Kevin Floyd (Raleigh, NC) for Clemson’s Chrissy Floyd: What are the one or two things you worked hardest to improve during the offseason, and what goals have you set for yourself this year?

Quotes from Kanetra Queen: “With the graduation of Krystal Scott and stepping into the point guard position, you have to bring a lot of leadership to the team. You lead the team, and the team follows in your path. At the same time, you have to bring the same intensity and passion for the game.”

“Those players that aren’t starting will come off the bench (because of our up-tempo style) and you don’t miss a beat. It’s an exciting thing to know that everybody on the team will be able to contribute in some way.”