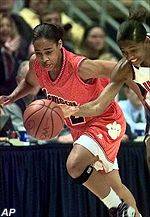 Greensboro, N.C. – The Atlantic Coast Conference announced an increase in the ACC women’s basketball television coverage as a part of the recently negotiated Raycom/Jefferson Pilot ten-year ACC Men’s Basketball television agreement that is set to begin in 2001-2002.

The new agreement includes an increase in national exposure for ACC women’s basketball on ESPN/espn2 and Fox Sports Net for both the regular season and the ACC Women’s Basketball Tournament.

Highlights from the new agreements as they relate to ACC Women’s Basketball include:

The ACC Women’s Basketball regional syndication package, aired on Home Team Sports, Sunshine and Fox Sports Net South, will jump from its current 16 game package up to a 26 game package over the next two seasons beginning in the year 2001-2002.

On a national scale, the league will be increasing its ESPN/espn2 appearances from the current four up to eight beginning with the 2001-2002 season.

In addition to ESPN, for the first time in history Fox Sports Net will air a regular season inter-conference game beginning in the year 2001-2002.

The ACC Women’s Basketball Tournament will also receive expanded coverage with two quarterfinal games to be aired live on Fox Sports Net South in addition to the current broadcast of both semifinal games and the nationally televised championship game.

Raycom/Jefferson Pilot holds all television, marketing and licensing rights for the Atlantic Coast Conference. ACC Associate Commissioner Bernadette McGlade comments, “This agreement clearly places ACC Women’s Basketball into the forefront of women’s basketball television exposure. The new contract will drive fan support and will continue to place our ACC teams into 40-76 million households around the country.”