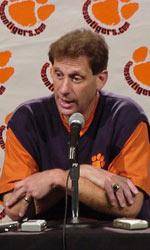 Swofford issued Hodge a one-game suspension for deliberately and blatantly hitting Maryland’s Steve Blake in the head during Sunday’s game at Cole Field House in College Park, Md. Hodge’s suspension will be in place for NC State’s home game against Virginia this Wednesday in Raleigh.

Official reprimands were also issued to Clemson’s Shyatt for his conduct in Saturday’s game with Duke, and Virginia’s Fuller for his actions in Virginia’s game against Maryland last Thursday. In addition, Swofford indicated that several other discussions regarding specific sportsmanship issues had been held with conference personnel, including game officials.

“Over the past week, several violations of the league’s sportsmanship code have occurred,” said Swofford. “This suspension and these reprimands are a direct result of unacceptable behavior during last week’s games. While we all understand that emotions can be at a high level during this time of the season, the ACC cannot tolerate this kind of behavior and will promote adherence to the league’s code of conduct as stated in the ACC Manual that both coaches and players have the responsibility of conducting themselves in a sportsmanlike manner. This is intended to send a loud and clear message that college basketball in the Atlantic Coast Conference is not going to be played in the way exhibited by these behaviors. The college game is something very special to many people and it must be respected by those who play it, coach it and watch it.”