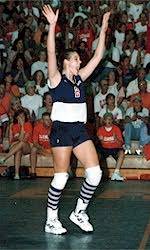 GREENSBORO, N.C. – Sixteen Atlantic Coast Conference scholar-athletes have been named recipients of the 2000 Weaver-James-Corrigan Postgraduate Awards, as announced by Commissioner John Swofford. The scholarships are given to selected student-athletes who have intentions of continuing academic work as full-time graduate students. Each recipient will receive $5,000 to use towards their graduate education. Each student-athlete has performed with distinction both in the classroom and in their respective sports, and demonstrated exemplary conduct in the community.

The awards are named in honor of the late Jim Weaver and Bob James as well as Gene Corrigan, past ACC commissioners. The league’s first commissioner, James H. Weaver, served the conference from 1954 to 1970 after serving as the director of athletics at Wake Forest University. His early leadership and uncompromising integrity is largely responsible for the excellent reputation enjoyed by the ACC today.

Bob James, a former University of Maryland football player, was named commissioner in 1971 and served for 16 years. During his tenure, the league continued to grow in stature and became recognized as a national leader in academics and athletics, winning 23 national championships while maintaining excellence in the classroom.

Eugene F. Corrigan assumed his role as the third full-time commissioner on September 1, 1987 and served until August of 1997. During Corrigan’s tenure ACC schools have captured 30 NCAA national championships and two national football titles. In the fall of 1990, Corrigan engineered the successful addition of the league’s newest member, Florida State University.

Prior to 1994, the Weaver-James postgraduate scholarships had been given as separate honors. The Jim Weaver award originated in 1970 to honor exceptional achievement on the playing field and in the classroom, while the Bob James award started in 1987 also to honor outstanding student-athletes.

NC State led the league in selections this year with a total of three, while Clemson, Georgia Tech, Maryland, Virginia and Wake Forest had two student athletes selected apiece. Duke, Florida State and North Carolina each had one representative on the list of honorees. Among the standouts are three-time All-ACC football selection Sims Lenhardt from Duke, three-time All-American cross country performer and four-time All-ACC selection Chan Pons from NC State and All-ACC women’s soccer selection Beth Keller from Clemson.

The 16 students will be honored Tuesday, April 11, 2000, in Greensboro, N.C. at a luncheon hosted by the Nat Greene Kiwanis.

Kia Asberg Florida State University Women’s Tennis – Lysekil, Sweden Named to the All-ACC team following the 1998-99 season after finishing second on the team with 30 victories on the year, that total was the second-most in school history…Received the team’s Golden Nole Award as the co-MVP from last year…Set the FSU consecutive match win streak record with 15 straight in 1999…Was named to the Dean’s List for the third straight year in 1999, and was a member of the ACC Academic Honor Roll.

Matt Burdick Wake Forest University Football – Winston-Salem, N.C. Was Wake Forest’s leading scorer in 1999 as he accounted for 75 of the team’s 243 points…Tied the school single-season record by kicking 16 field goals on 23 tries and broke the school record with his 38th career field goal against Clemson, he finished his career with 46…Earned ACC Specialist of the Week honors following Wake’s win at North Carolina…A Dean’s List and ACC Honor Roll selection, he earned his undergraduate degree in just three years at WFU.

Carolyn Clevenger Georgia Institute of Technology Volleyball – Oakland, Calif. A three-year starter at setter for Georgia Tech and was named the team captain in 1999…Holds a perfect 4.0 grade point average and has been named a GTE Academic All-America first-team member in each of the last two years…Was given Georgia Tech’s Bobby Dodd Scholarship in 1998 as the school’s top female scholar athlete…Ranks third in Georgia Tech history with 2,804 assists…ACC Academic Honor Roll selection in each of the past three years.

Alison Coday Clemson University Volleyball – Springfield, Mo. Member of the 1999 All-ACC Volleyball First Team…Selected to the AVCA All-District III Team for the third consecutive year in 1999…Ranked third in the ACC with 4.60 kills per game in 1999 and was ninth in the ACC in hitting percentage with a .279 average…Currently ranks fourth on Clemson’s all-time kills list with 1,678…Has been named the ACC Player of the Week twice in her career.

Tamarra Jenkin Georgia Institute of Technology Women’s Tennis – New Braunfels, Tex. The 1999 ACC Champion at No. 2 Doubles…Carries a perfect 4.0 grade point average and was named to the GTE Academic All-District III first team in 1998 and 1999…Enters her senior season with a career singles record of 58-45 and a doubles record of 54-35…Needs just 10 doubles wins to become Georgia Tech’s career leader and currently ranks fifth in Georgia Tech history in career singles victories.

Beth Keller Clemson University Women’s Soccer – Hilton Head, S.C. A three-time All-ACC selection, including a First Team selection in 1999…Named first team All-Southeast Region in 1996 and 1999…Finished her career in fourth on Clemson’s career list for goals scored with 35 and third in assists with 23 in her carrer…Selected as a member of the US National Under 21 Team…Had 12 game-winning goals in her career at Clemson.

Sims Lenhardt Duke University Football – Charleston, S.C. Three-time Lou Groza Award Semifinalist, and a finalist in 1997…Finished the 1999 season as Duke’s all-time leading scorer, as he had a total of 240 points in his career…A three-time All-ACC selection, he owns a school-record streak of 62 consecutive PATs…set a new ACC and school record with two field goals of 50 yards or longer in a single game against Vanderbilt in 1998.

Larry Long University of Maryland Baseball – Columbia, Md. Maryland’s all-time single-season stolen bases leader and enters the 2000 season with 54 career steals, needing just six more to break the Terrapins all-time record of 59…Is the Terps’ all-time leader in sacrifice hits with 25 and set a single season record with 14 sacrifice’s in 1999…A consistent Dean’s List selection while at Maryland and was an ACC Academic Honor Roll selection last year.

Beth Murphy University of Maryland Volleyball – Golden, Colo. In 1999 she led Maryland with 428 kills and 308 digs, as she is just the sixth player in school history to post more than 400 kills in a season…Recorded a career-high 27 kills vs. NC State in 1999…As a junior, she was selected to the ACC Honor Roll…In 1998, she also led the Terrapins with 381 kills and 330 digs, which tied the 10th-best single-season total in school history.

Chan Pons NC State University Cross Country/Track & Field – Franklin, N.C. Named an NCAA All-American for the third time in his career following an 18th-place finish at the 1999 NCAA Championships, the highest finish by a Wolfpack runner since 1987…Captured the 1999 ACC Championship en route to being named All-ACC for the fourth time, one of only three runners to accomplish the feat…Was NC State’s highest finisher in every meet in which he competed in his career.

Stephan Pro Wake Forest University Cross Country/Track & Field – Olathe, Kan. Earned All-ACC honors this season as he finished second in the 5,000 meters at the 2000 ACC Indoor Track Championships, also had a strong finish in the 3,000 meter event, finishing fouth..Named All-ACC in 1998 as he finished sixth at the ACC Cross Country Championships…This past season, his top finish came at the Furman Invitational where he placed fifth…Was also the Demon Deacons’ top finisher at the NCAA Southeast Regional in 1999.

Austin Ramirez University of Virginia Swimming, Brookfield, Wisc. One of the top distance freestyle swimmers in the nation…Was named the 2000 ACC Most Valuable Swimmer after sweeping three individual ACC titles at the conference championships, including winning his fourth straight title in the 1650 meter freestyle with a meet-record time of 15:00.98…He also won his fourth straight individual title in the 500 meter event…A two-time Academic All-American.

Jason Smith NC State University Baseball – Goldsboro, N.C. Moved into the Wolfpack’s starting lineup on March 2, 1999 and batted .282 in 50 games after earning a starting spot …Had a nine-game hitting streak form March 16-30 last season and batted an impressive .514 during that stretch…As a freshman, he batted .429 in four games of the NCAA South II Regional for NC State…Holds a bachelor of science degree in construction engineering and management, and is working on his master’s degree in civil engineering.

Jennifer Strasburger University of North Carolina Swimming – Mercer Island, Wash. A three-time All-America selection while at North Carolina…Has been named to the Dean’s List four times in her academic career, along with being an Academic All-America pick…One of the Tar Heels’ top swimmers in the middle distance freestyle events and on the UNC relay teams…Named to the ACC Academic Honor Roll following the 1999 season and was named a team captain for the 1999-2000 season.

Michelle Vizzuso University of Virginia Field Hockey – Fairfield, N.J. The Cavalier record holder in career assists with 60, which ranks second all-time in the ACC…She is the first player in ACC history to record 50 goals and 60 assists in a career and is the only person in Virginia history to record double-digit totals in game-winning goals (11) and assists (12) in a career…Named to the US Field Hockey National Team that will compete in the 2000 Olympic Qualifying Tournament in March.