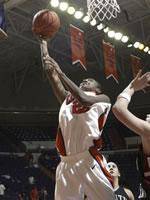 On Monday’s show, ACC women’s hoops announcers Beth Mowins (play-by-play) and Debbie Antonelli (analyst) join the show live via satellite to preview the ensuing matchup featuring No. 2 Duke (15-2, 6-0 in ACC) at Clemson (15-3, 5-2), which can be seen on Fox Sports Net at 7 p.m., immediately following ACC LIVE.

Also on Monday, Hildreth spotlights Clemson’s senior guard Lakeia “Chicken Bone” Stokes. So named because of her slender frame, Stokes is enjoying her best season as she leads the Lady Tigers in scoring (18.4 ppg), rebounding (8.4), assists (72), and steals (44). Stokes started this season with a refocused outlook on her game; she came out with a new attitude, pledged to work harder and wanted to be sure to leave her mark at Clemson. With the Lady Tigers tied for second-place in the ACC and 15-3 overall, Stokes has clearly been a leader in making the success Clemson basketball enjoys today. Hildreth also talks to Stokes’ teammates and finds out what they think of the new “Chicken Bone.”

Continuing with the Clemson connection, Monday’s ACC LIVE continues its “Flashback” segment -this time focusing upon the career of former Tiger great Wayne “Tree” Rollins (1973-1977). The only Clemson basketball player to average a double-double in four straight seasons, Rollins ranks fourth in the ACC in career rebounds (1,311) and is second all time in blocked shots (450). In 1977, he was a third-team All American, and in so doing became the first Clemson player to earn a spot on any Associated Press All-America team. Rollins was also all-conference in ’75-77, and went on to become a member of the ACC 50-year anniversary team. Following his Clemson career, “Tree” was selected in the first round of the ’77 NBA Draft, going to the Atlanta Hawks. He ended his 18-year NBA career and went on to become the head coach of the NBDL’s Greenville (S.C.) Groove in ’02.

Also on tap for Monday’s ACC LIVE “The Week Ahead” segment, which previews the conference’s biggest games over the next few days. The week’s top game is Thursday’s (2/5) anticipated battle between the No. 1 Duke Blue Devils (16-1, 5-0) and the 12th-ranked North Carolina Tar Heels (13-4, 3-3). This is the first showdown of the season in one of college basketball’s biggest and oldest rivalries. The Devils and Heels first met in 1919, and Thursday’s renewal marks their 216th meeting (UNC leads, 123-92).

Monday’s show features Hildreth’s “Speed Read,” which tackles all the up-to-the-minute happenings around the nine-member ACC family, and “Hog’s Hot List” – the host’s roundup of the ACC’s best performances and players of the week.