On Thursday evening, the Clemson Track & Field program will start its quest towards an ACC title, as the program will begin competition against their ACC competitors in the quest for conference glory. Before the competition gets underway, we’ll preview the three-day competition, focusing on the track events in this analysis.

Clemson’s short spring group has been phenomenal this season, as the contingent, under the direction of assistant coach Marvin Gibson, has made a significant mark on the record books. In the women’s 60 meters, Rebekah Smith enters the competition after an impressive performance in the same event at the LSU Twilight on Jan. 21, where Smith went 7.23 to become the third-fastest to ever compete in the event at Clemson. Smith will be joined in the preliminary round by Sarah Hill.

For the men, Marcus Parker has served as a swiss army knife for the Tigers, with Parker being the top athlete in the men’s 60 meters, 200 meters and 300 meters so far this season. Parker will be joined by Fabian Hewitt on the start line of the men’s 60 meter prelims, with the athletes carrying lifetime bests of 6.67 and 6.75, respectively, into the weekend. Both marks have been logged during the 2019-20 indoor campaign.

In the 200 meters, Parker remains the top Tiger, with the senior having gone undefeated throughout the regular season in the event. Parker carries an indoor personal best of 20.70 into the meet, good enough to make him No. 3 on Clemson’s all-time list for the event. Parker will be one of five Tigers competing in the event on the men’s side.

For the women, Hill and Aliyah Mallard are leading the way for the Clemson women, with the two carrying bests of 23.55 and 23.56, respectively, into the meet. Hill’s time is good enough to give her the No. 10 position on the event’s all-time list at Clemson. Just like for the men, there will be five women competing for Clemson in the prelims of the 200 meters.

The Clemson 400 meters races will be a spectacle to watch come Friday afternoon, as a mixture of quality and depth will converge on the track with the Tigers poised to leave their mark on the competition. Clemson will have three athletes take to the track in the men’s edition, while two athletes will compete for the women. Deonte Tolbert will lead the way on the men’s side, with Lakeisha Warner and Nicolee Foster set to pace the women’s efforts. 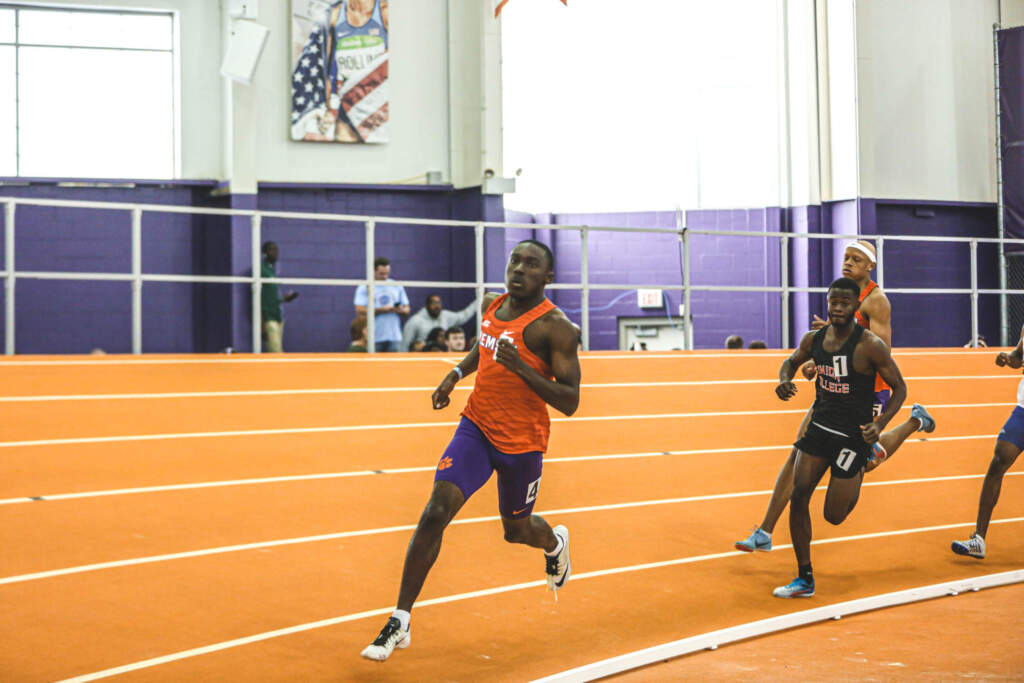 The 800 meters has historically been a marque event for Clemson, with the Tigers routinely being mentioned amongst the nation’s best. The 2019-20 Clemson roster is no different, with Laurie Barton and Andrea Foster ranking as two of the best women in the country, as both are ranked within the top-20. Foster is the highest-ranked Tiger on the national level after running 2:05.30 in the 800 meters early in January.

On the men’s side, Malik Epps will be the lone Tiger competing, looking to score valuable points for the Tigers in their quest for team hardware. A series of tactical races during the regular season prevented Epps from unleashing his full speed but look for quick times to be logged throughout the weekend.

The Clemson distance crew will be dispersed across a series of events throughout the weekend. Jackson Leech will be the first Tiger distance runner on the track, as Leech will race in the 5km at noon on Friday. Leech has been the lone male to race the event this indoor season, running 15:02.52 at the South Carolina Invitational.

Harris will double back during the weekend to join Logan Morris in the women’s 3km on Saturday afternoon. Morris, who has just returned to competition in the past two meets, will look to lower her season’s best time of 9:55.19. Harris, who has run 9:50.72 to log the team’s fastest time this indoor season, will look to work with Morris to make an impact on the team scoring.

The 60 meter hurdles has been a bright spot in what has been a great indoor campaign for Clemson, as Devon Brooks and LaFranz Campbell are the No. 4 and No. 5 athletes in Clemson history for the event. Brooks and Campbell will be joined by Juwan Augustin in the preliminary heats. The ACC currently has five of the top 13 times in the nation for the men’s 60 meter hurdles, so look for quick times to be logged throughout the heats and especially in the finals on Saturday.

A trio of women will take to the straightaway for the women’s edition of the event, with Sidney Marshall leading the way after getting a late start to her season. Marshall’s time of 8.29 at the Bob Pollock Invitational ranks her as fifth-best in the ACC. Kori Carter and Trishauna Hemmings join Marshall in making Clemson have three of the top 13 athletes in the event.