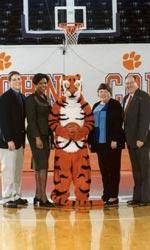 GREENSBORO, N.C. — The Atlantic Coast Conference will be honoring the following group of individuals that comprise the ACC Women’s Basketball Silver Anniversary Team. These 23 players were all named to the Silver Anniversary Team as a result of being selected as an ACC Tournament Most Valuable Player. These athletes are set to be honored Sunday, March 3, during the semifinal games. To read more about each Silver Anniversary member, please see the short pieces that follow.

1978 – Maryland’s Tara Heiss was named the first ACC Tournament MVP in 1978 after leading the Terrapins to an 89-82 victory over NC State. Heiss scored a game-high 30 points in the championship contest and totaled 60 points for the inaugural event. She still owns the Terrapins’ record for assists in a season with 249 in 1978.

1979 – KRIS KIRCHNER earned the MVP award after leading the Terps to their second-straight ACC Title. Kirschner, a great rebounder, still owns the top average in Maryland history at 10.5. However, it was her double-double performance of 24 points and 10 rebounds against NC State in the title bout that led her to MVP recognition.

1980 – GENIA BEASLEY was named MVP of the 1980 ACC Tournament after scoring 28 points and grabbing nine rebounds against Maryland in the championship contest. Beasley, who still ranks first all-time at NC State in both career points and career rebounds, led the Wolfpack to their first ACC Championship in College Park, Maryland.

1981 & 1982 – Barbara Kennedy was the first player in ACC history to be named MVP when her team didn’t play in the championship. In ’81, she had an amazing 21 rebounds and 30 points in the first round and followed that with a 30-point seven-rebound performance in the semifinals. In ’82, Kennedy led Clemson to the title game where she earned co-MPV honors, totaling 88 points and 29 boards for the tournament.

1982 – MARCIA RICHARDSON was a member of three ACC Championship teams for Maryland, and she earned co-MVP honors in 1982 with Clemson’s Barbara Kennedy. Richardson scored a team-high 22 points in the championship contest, leading Maryland to a 93-81 victory. She totaled 49 points in three games for the Terps that year in Raleigh.

1983 – NC State’s LINDA PAGE set an ACC Tournament record in 1983, scoring 100 points in three games. Most impressive, however, was her semifinal performance against Clemson. In that contest, Page set a single-game scoring record that still stands with 42 points on 13-of-22 shooting from the floor and 16-of-18 from the line. She earned co-MVP honors in 1983.

1983 – Jasmina Perazic earned co-MVP honors for Maryland with NC State’s Linda Page in 1983. Maryland won it’s third-straight title that year, led by Perazic. She totaled 55 points, including 16 in the championship. Even more impressive was her field goal percentage of .604 for the tournament.

1984 – TRESA BROWN became the first player in North Carolina history to earn ACC Tournament MVP honors. Brown led the Tar Heels to their first ACC Title, in the form of a 99-76 win over NC State. Brown poured in 32 points on 14-of-20 shooting from the floor in the championship game, and she totaled 75 points for the tournament.

1985 – DAWN ROYSTER earned ACC Tournament MVP honors in 1985, even though her Tar Heel team lost a tough 81-80 contest to NC State in the finals. Royster was certainly deserving, as she led all scorers with 23 points in the title match. Royster put in a total of 70 points and pulled down 36 boards for the tournament, averaging a double-double.

1987 – DONNA HOLT earned ACC Tournament MVP honors in 1987, even though the Cavaliers lost the championship contest by one point to NC State. Holt’s outstanding performance began in the first round where she had 27 points. She went on to score a toal of 44.

1989 – VICKY BULLETT put together an incredible tournament in 1989, earning MVP honors. Bullett led Maryland’s rebounding efforts in each game, averaging 12.3 for the tournament. Most impressive was Bullett’s 21-point, 13-rebound performance in the championship contest.

1990 – NC State’s ANDREA STINSON had an incredible tournament in 1990. She poured in 76 points and pulled down 29 rebounds, helping lead the Wolfpack to the championship. Stinson ranks first all-time at NC State in career scoring average with a 22.7 mark.

1991 – NC State won it’s first title since ’87 and it’s fourth overall ACC Championship in ’91, led by the efforts of Sharon Manning. Manning put together an incredible 31-point, 19-rebound performance in the championship contest, leading the Pack to an 84-61 victory over Clemson in the final tournament held in Fayetteville, N.C.

1992 – Two-time ACC Player of the Year DAWN STALEY helped lead the Cavaliers to two ACC Tournament titles during her career. In 1992, she earned MVP accolades after scoring a game-high 24 points in UVa’s 70-69 win over Georgia Tech. She put together 41 points for the tournament, and Staley went on to earn National Player of the Year honors twice.

1993 – DENA EVANS was named ACC Tournament MVP after one of the most memorable championship games in ACC history. Evans scored 19 points for Virginia to lead the Cavaliers to a 106-103 win in the only triple overtime game in ACC Tournament history, marking the Cavaliers’ second-straight title and third in three years.

1994 & 1995 – North Carolina’s Charlotte Smith helped begin an era of Tar Heel dominance in the ACC Tournament with four titles in five years. Smith averaged 21 points and nine rebounds in ’94 to earn MVP honors. She then increased those numbers to 23.3 points and 11.0 boards a game to be named MVP for the second-straight season in 1995.

1996 – Clemson won its first ACC Title in 1996, led by the efforts of LAURA COTTRELL. Cottrell was incredible on the boards in the Tigers’ championship run, averaging 12.3 for three games. She had a double-double in the title bout against Duke with 12 points and 10 boards.

1997 – North Carolina won it’s third ACC Title in four years in 1997, much to the credit of superstar Marion Jones. Jones put together back-to-back games of 23 points in the semifinals and finals and led the Tar Heels to a 62-58 win over Clemson.

1998 – TRACY REID began UNC’s 1998 title run with a 31-point, 12-rebound performance in the quarterfinals. Reid went on to post a double-double in each game and average 21.0 points and 11.0 rebounds during three games in Charlotte, N.C. She led the Tar Heels to an 81-50 win over Clemson in the championship.

1999 – Clemson’s ITORO UMOH earned ACC Tournament MVP honors in 1999 after the Tigers defeated North Carolina, 87-72, in the championship game in Charlotte, N.C. Umoh stepped up when it counted, scoring a game-high 26 points in the finals on 8-of-13 shooting from the floor and an impressive 8-of-10 from the line.

2000 – North Carolina’s Nikki Teasley earned the new millennium’s first MVP honor as the ACC Tournament kicked off a five-year stay in Greensboro, N.C. After scoring just six points in the quarterfinals, Teasley went on to score 17 in the semis and an impressive 31 in the finals to lead the Heels. It was not enough, though, as UNC fell to Duke by a 79-76 count.

2001 – GEORGIA SCHWEITZER earned the first MVP honor in Duke history in 2001 as she led the Blue Devils to their second-straight ACC Championship in the form of a 57-45 victory over NC State. Schweitzer, a two-time ACC Player of the Year, scored 61 points in the tournament to help Duke remain undefeated in the Greensboro Coliseum.